For years, Black Friday has attracted the interest of many Canadians. This shopping holiday, which comes from the United States, draws in crowds of consumers who are making the best of the discounts offered to them. That is why, seeing the interest of clients, stores decided to expand their offers for the entire week, not just Black Friday. Thanks to that, discount lovers can enjoy rebates from the Monday preceding Black Friday until Cyber Monday.

Picodi.com analytics decided to check the attitude of Canadians toward Black Friday, where in Canada the interest in Black Week sales is the biggest, as well as how much money consumers spend and what they buy. 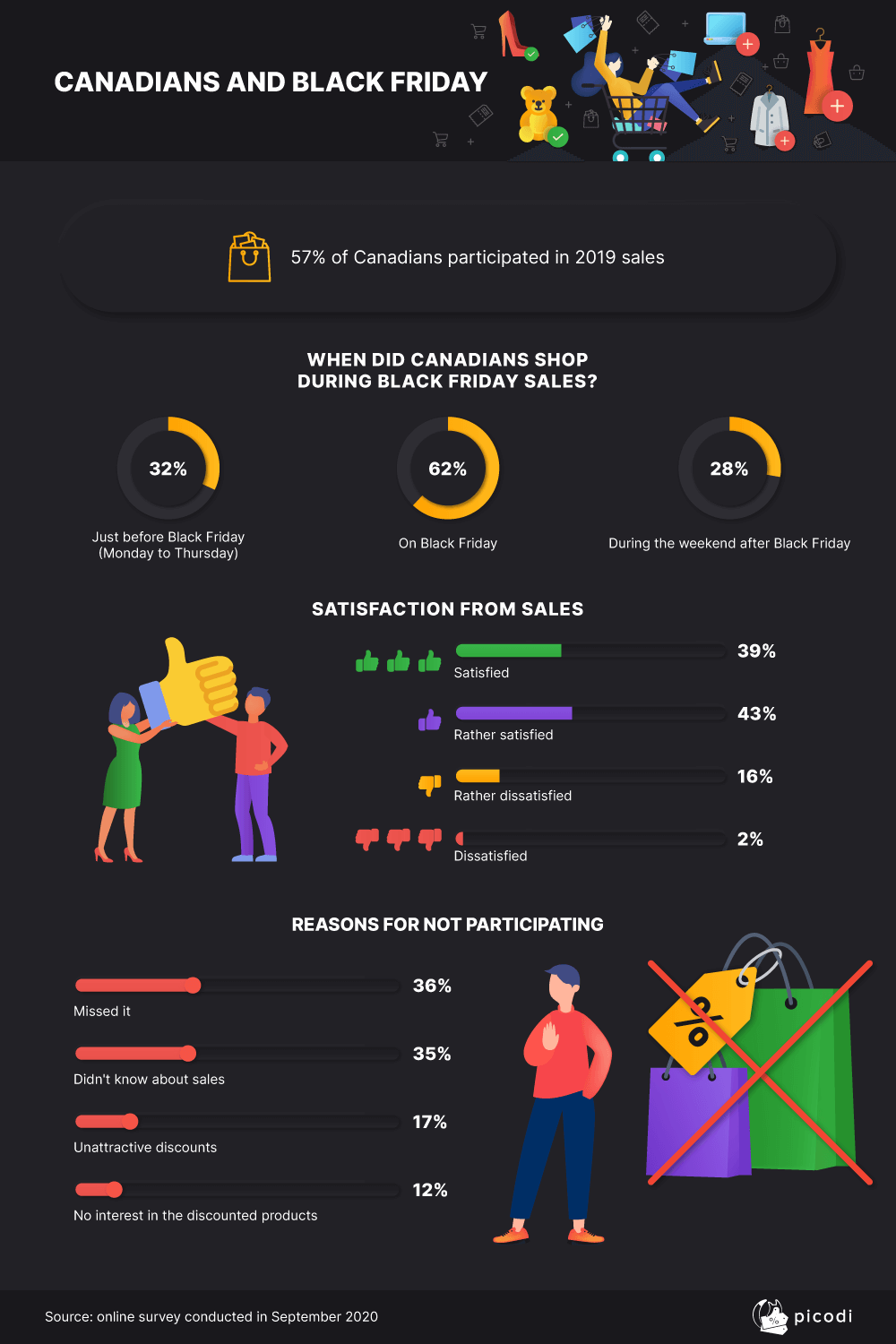 More than half of Canadians (57 percent) took part in last year’s Black Friday sales. Although this number may surprise, in reality not all consumers participated in the sale on Black Friday itself. 62 percent of shoppers decided to shop on Friday, but as much as 32 percent did their shopping from Monday to Thursday, and 28 percent enjoyed special offers over the weekend after Black Friday (Saturday and Sunday).

Among the people who did not take part in last year’s Black Friday, the most common reason (36 percent of answers) was that they simply missed the event. 35 percent of people taking part in the survey said that they did not know what Black Friday is at all. The remaining pointed out that the discounts were too low or that the products that they wanted to buy were not on sale (17 and 12 percent respectively). 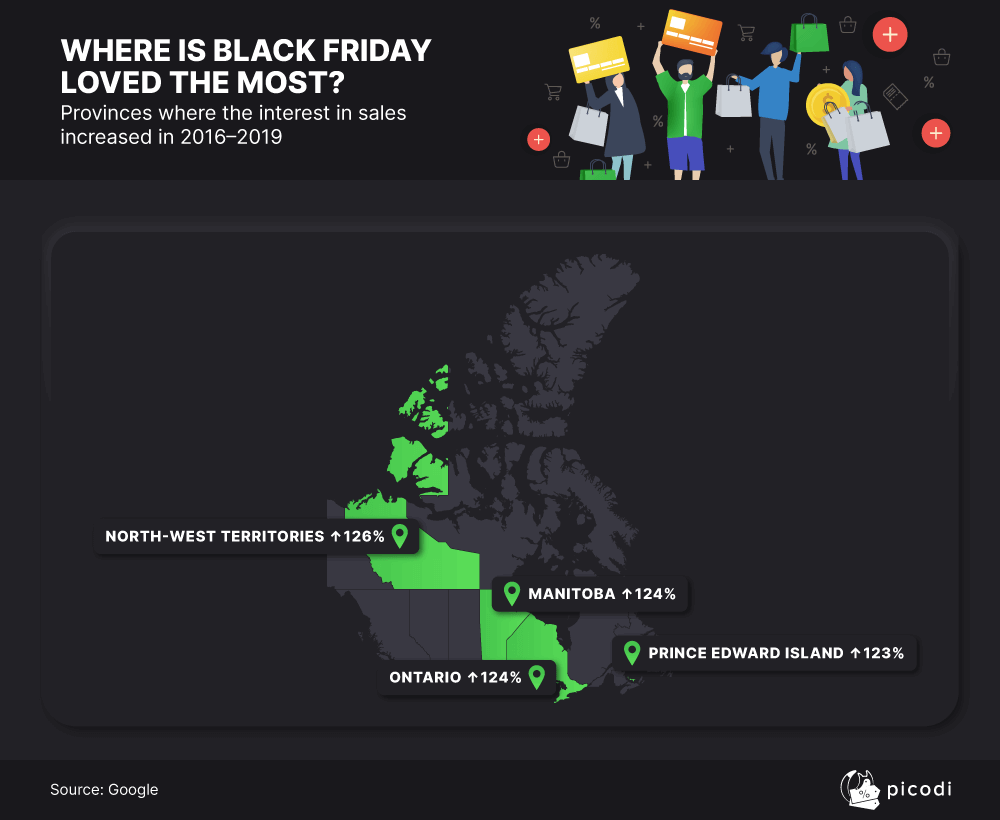 Based on online search queries, we found the provinces where the interest in Black Friday sales increased the most from 2016 to 2019. Northwest Territories, where the increase of interest amounted to 126 percent, took the first place.. Ontario and Manitoba tied for the second place — in both these cities, the interest in discounts increased as much as 124 percent. Prince Edward Island was just behind with a 123 per cent increase.

The least interested in Black Friday sales are citizens of British Columbia, Quebec, and Alberta where the number of search queries dropped by 82 percent each. 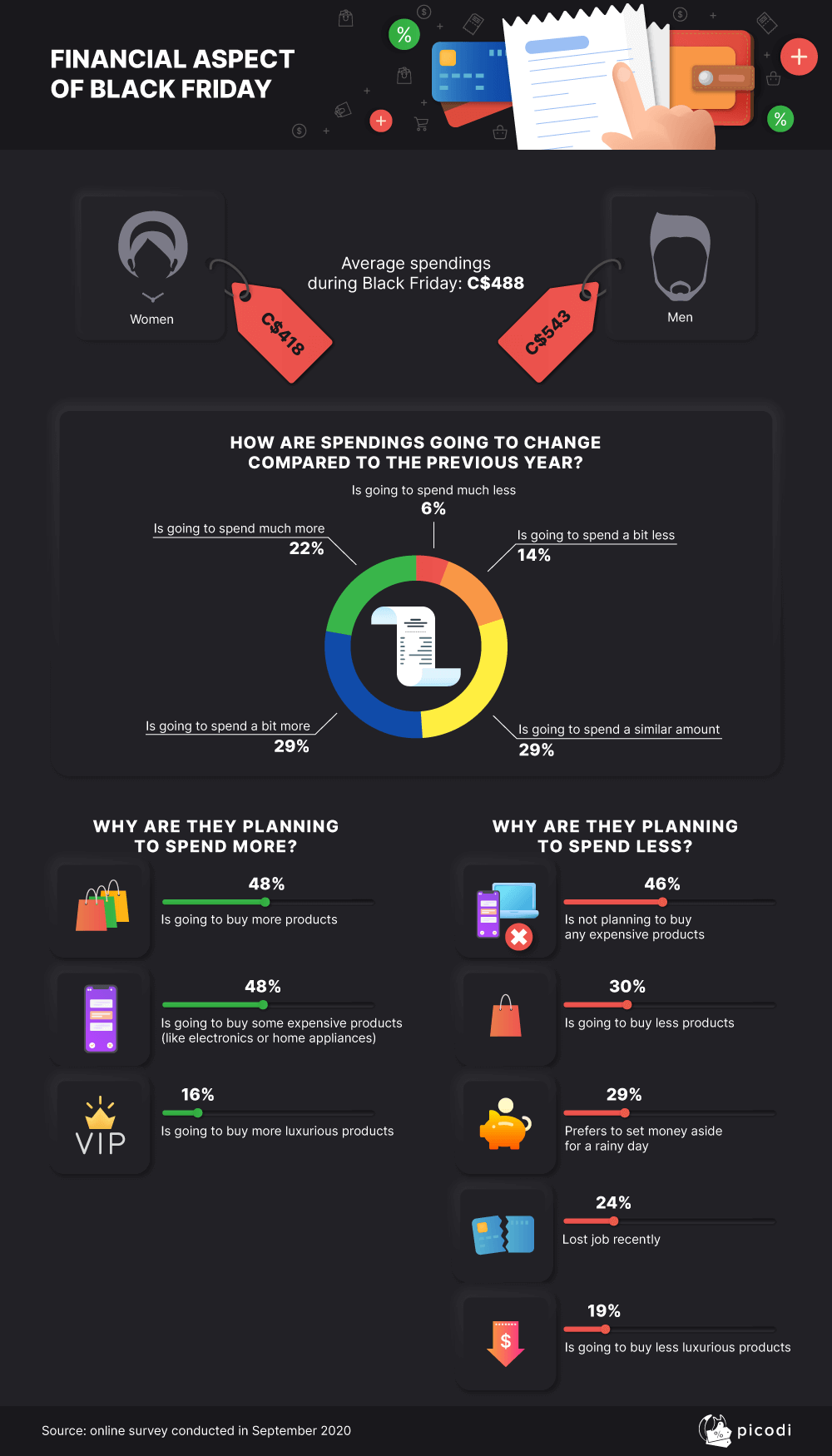 Statistically, Canadians spend $488 on Black Friday. It is worth noting that men spend a lot more money than women during Black Friday sales: $543 vs $418. It doesn’t necessarily mean that men buy more than women — they could just buy more expensive items.

People who are going to spend more usually justified their answers by the fact that they are simply going to buy more products this year or are planning to buy some expensive item this year, such as electronics or home appliances (each answer 48 percent). The remaining 16 percent are going to buy more luxurious products than last year. On the other hand, among the people who are planning to spend less, 24 percent said that their smaller budget is caused by job loss. 46 percent is not planning expensive shopping this year, and 30 are going to buy fewer items. 29 percent prefers to set money aside for a rainy day. 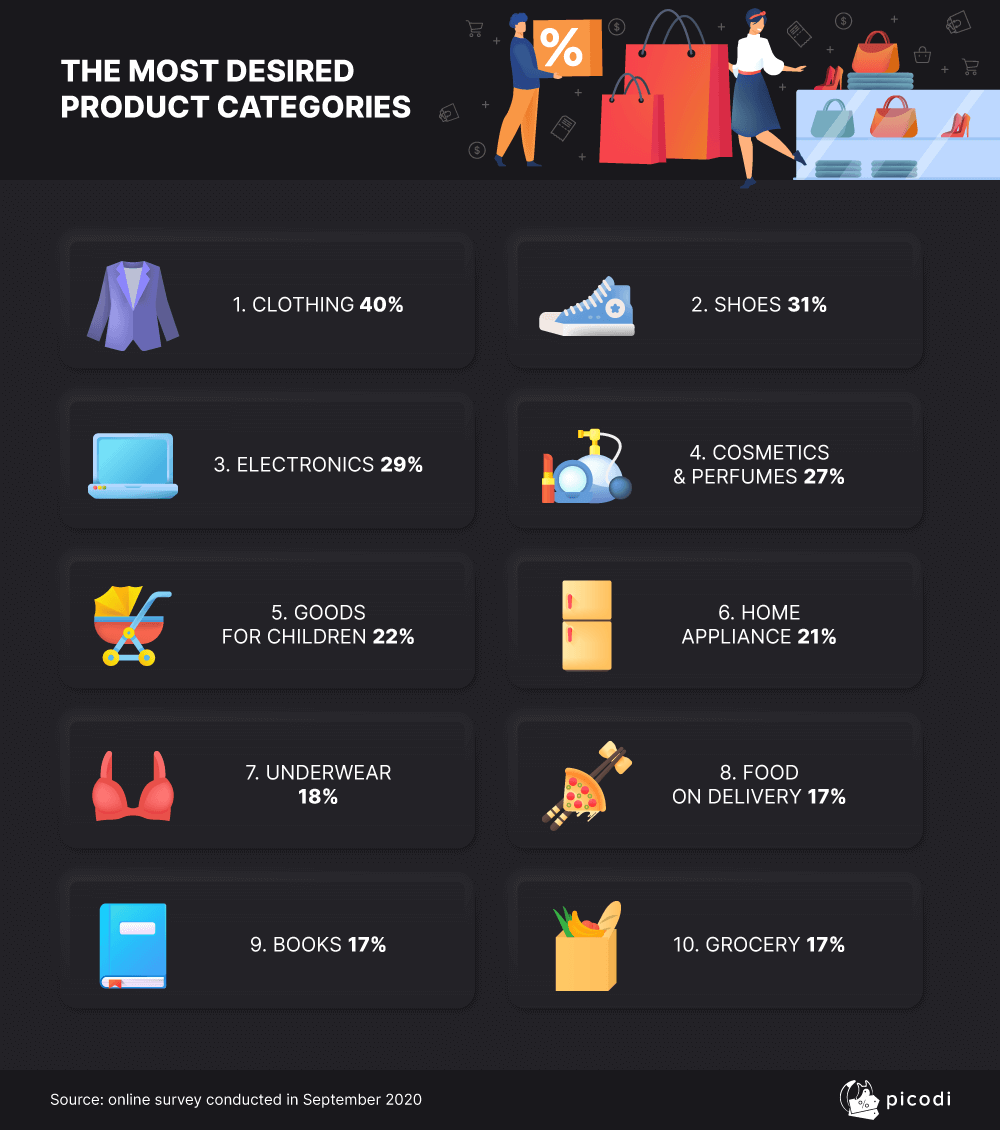 Invariably, clothes are among the products which rule during Black Friday sales. It is the most frequently chosen category of products — 40 percent of consumers will buy clothing. Shoes (31 percent) and electronics (29 percent) were the second and third top categories.

Cosmetics ranked fourth (27 percent), followed by child care articles (22 per cent). Home appliances were less popular during Black Week (21 per cent), similarly to underwear (18 per cent). Food on delivery, books, and grocery rounded out the top ten categories with 17 per cent each.