For each order at Malaysia Airlines, you'll get cashback to your Picodi account!

You can pay for orders at Malaysia Airlines using:

Check out Malaysia Airlines offers in other countries: 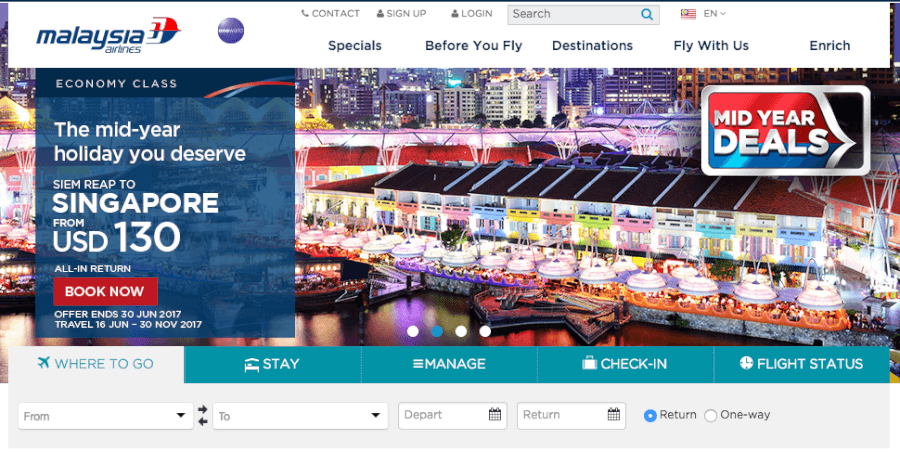 Since September 2015, the airline has been managed by Malaysia Airlines Berhad and it is the national carrier of the Malaysian country. It offers travelers the best way to fly from, to fly to and around Malaysia. This airline symbolises the amazing diversity of the country as it captures the rich Malaysian traditions, cuisines, culture and warm hospitality with its service on board. It has opened up more destinations in the country than any other carrier. Along with its alliance, Malaysia Airlines offers a seamless experience in traveling to more than a thousand destinations in over one hundred and fifty countries, offering frequent flyer rewards and special privileges. It also offers access to over six hundred and fifty airport lounges in the world.

Malaysia Airlines has been using the slogan, `Going Beyond Expectations’ from the nineteen nineties to about ten tears back in terms of international branding. It rolled out a Business Transformation Plan nine years ago. Its airline designator code MH, as allotted by International Air Transport Association, also stands for Malaysian Hospitality. It emphasises the hospitality extended by the cabin crew. Since 2013, a new slogan is being used, stating `Journeys are made by people you travel with’.

A three-year deal of sponsorship has been signed by Malaysia Airlines with Liverpool Football Club that belongs to the Premier League. This agreement has given the right to Malaysia airlines to become the Official Partner of Liverpool Football Club. A six-minute video is always broadcast when the matches are held at Anfield which is the Club’s home ground. It is being broadcasted between the 2016 and 2019 seasons.

The frequent flyer program of Malaysia Airlines is known as Enrich. It is involving a variety of carriers, credit card issuing companies, banks, retailers and hotels all over the world. In September 1987, the Esteemed Traveller program was introduced by the airline.

Malaysia Airlines offers for June 2017 and beyond include all-inclusive flight privileges which feature a thirty-kilogram baggage allowance for travelers, credit card charge waiver and free meals given in flight. Another offer is available that allows redemption of 30% Enrich Miles within Malaysia. These offers could be activated by visiting Picodi regularly!

Malaysia Airlines, just like last year, will be participating in the Black Friday 2021 and Cyber Monday 2021 sales this month. Make sure to check regularly for new deals related to both events!