At the beginning of every year, minimum wages are updated in many countries. However, the concept of a minimum wage is not ubiquitous: we won’t find the lowest legal remuneration in Nordic countries, Italy, Switzerland or Singapore. Even so, in Hong Kong this concept is well-known and practised.

Nevertheless, the question whether a minimum wage is high enough to allow us to meet the basic nutritional needs still remains. Picodi.com Analysis Team decided to take a closer look at prices of the 8 universal food groups in 52 countries and confront them with the current minimum wage in respective countries. It turns out that in some countries the minimum wage is barely high enough to purchase a modest nutritious food basket. How does Hong Kong look in comparison to other countries?

For the purpose of this report, we created an example of a shopping basket filled with items from the 8 universal food groups: bread, milk, rice, eggs, cheese, meat, fruits and vegetables. Even though this list is short and frugal, these products meet the nutritional needs of an adult and the prices are constantly monitored around the world.

In Hong Kong, for a basket filled with basic items from the list above, you will have to pay around HK$1,657.13. 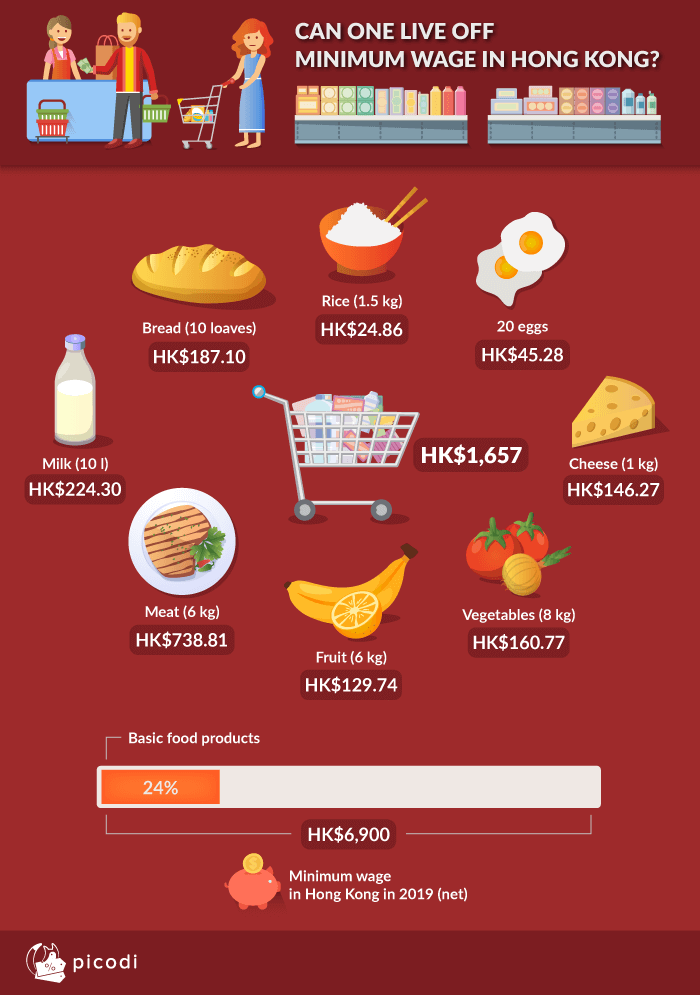 The Philippines and Nigeria are in the worst situation, though. The minimum wage in Nigeria is so low that it doesn’t cover the costs of even the most basic shopping basket.

Popular stores and brands you can save money on with Picodi