The 2019 iPhone Index. Can Canadians Afford the New Apple Gadget?

Apple’s pricing policy is causing more and more astonishment every year and is a beloved inspiration for internet memes. Still, the popularity of Apple products is not fading. They have a huge base of fans around the world, including Canada.

After the September presentation of Apple’s new devices, the analytical team of Picodi.com decided to compare average salaries in Canadian provinces with the price of an iPhone 11 Pro (the 64GB model) in order to count the number of workdays required to buy it. 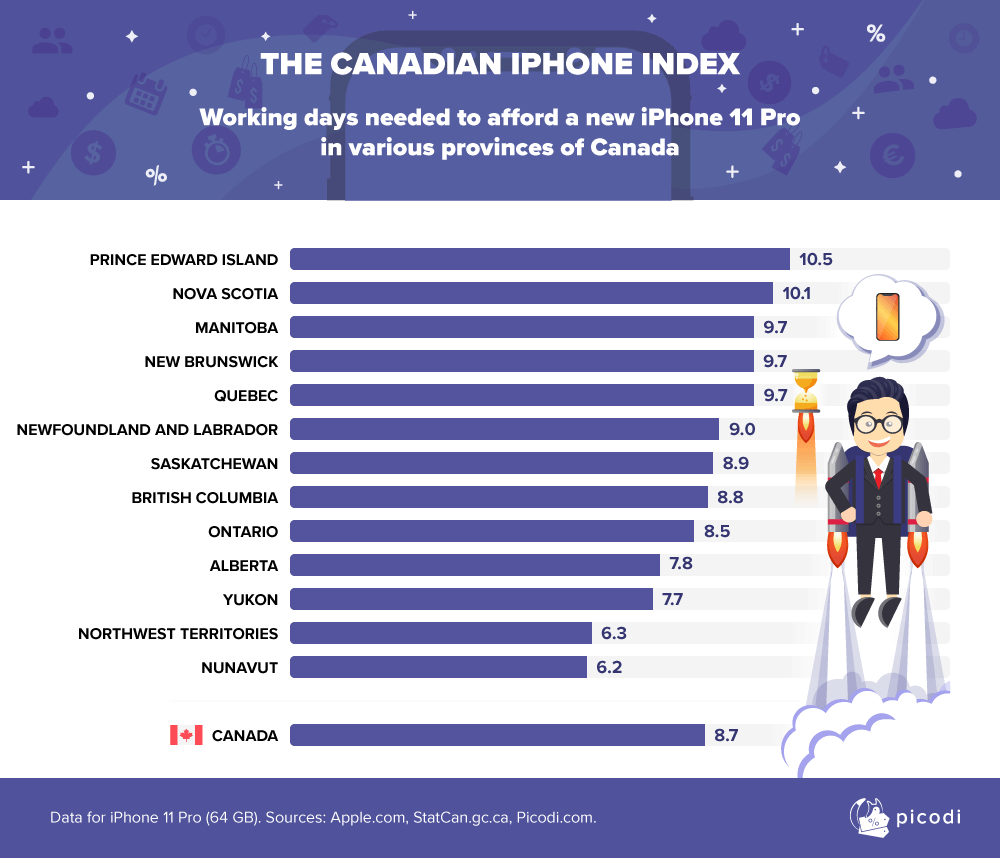 The official price of the iPhone 11 Pro (64GB) in Canada is $1,379. Assuming that, according to Statistics Canada, the average weekly wage in the country is $1,031 gross ($793 net), a statistical Canadian would have to work for 8.7 days to afford this year’s iPhone (not counting living expenses).

However, if you look at the average wages of each province, the situation looks quite different.

In the lead of the rank are Nunavut and Northwest Territories, where the ratio of the iPhone’s price to the average salary is the most attractive. A statistical Nunavut resident should be able to save up for iPhone 11 Pro in 6.2 days and NWT resident – in 6.3 days.. Below the national average placed also people from Yukon, Alberta and Ontario (7.7, 7.8 and 8.5 days respectively).

The reverse record belongs to Price Edward Island: a statistical resident of this province would have to lay aside 10.5 days worth of wages to buy the iPhone. Nova Scotia was right behind, with 10.1 days. In provinces like Manitoba, New Brunswick and Quebec, the new gadget has got the value of 9.7 workdays.

Closer to the national average were people from Newfoundland and Labrador (9 days), Saskatchewan (8.9 days), and British Columbia (8.8 days).

The iPhone Index 2019 has been calculated on the basis of iPhone 11 (64GB) Pro prices announced publicly on local Apple website. The average salaries come from Statistics Canada. We divided the weekly wages by 5 – the average number of workdays in a week.

Do you want to share our charts and graphs? Feel free to use the data and infographics from the report for both commercial and non-commercial purposes as long as you indicate the author of the research (Picodi.com) with a link to this subpage. If you have any questions, please contact us: research@picodi.com.