Interesting facts about the shopping habits of Emirati internet users

Although there is no denying that online shopping has brought much convenience to people’s lives, the issue poses a great challenge for retailers as there is a number of points to consider. What kind of devices do Emiratis use to shop online? How much money do they spend? How does the shopping activity change across the year? Is online shopping more popular among men or women? To look for answers, Picodi.com analysed last year’s data and presented the results in this report.

Although mobile commerce is booming globally, it turns out Emiratis still prefer desktops over smartphones. According to our internal data, only 1 out of 3 transactions was made with the use of a mobile device last year.

What is more, Emiratis tend to spend less when using smartphones. When they did shopping with the use of a phone, the average order value was only 687 AED. It’s about 163 AED less than when using desktops (850 AED) and 141 AED when using tablets (828 AED). iOS users spend more than Android users — 763 AED vs 681 AED on average.

The important question is who shops online more — men or women? Our data shows that there were more purchases made by Emirati men than those made by women, 59% and 41% respectively.

According to our research, the average order value of an Emirati shopper is the highest in May (871 AED), followed by February and April (819 and 814 AED accordingly).

If we look at the activity of Emirati consumers across the week, it turns out that mobile users are the most active at the beginning of the week — 18% of all purchases are made on Sunday. On the other hand, shopping on computers is preferred during the weekend — Friday (19%) and Saturday (17%). Emiratis definitely prefer to shop in the evenings: the peak of sales occurs between 18:00 and 24:00.

The most popular categories for online shopping among Emiratis were: food on delivery, travel, clothing, grocery and electronics. 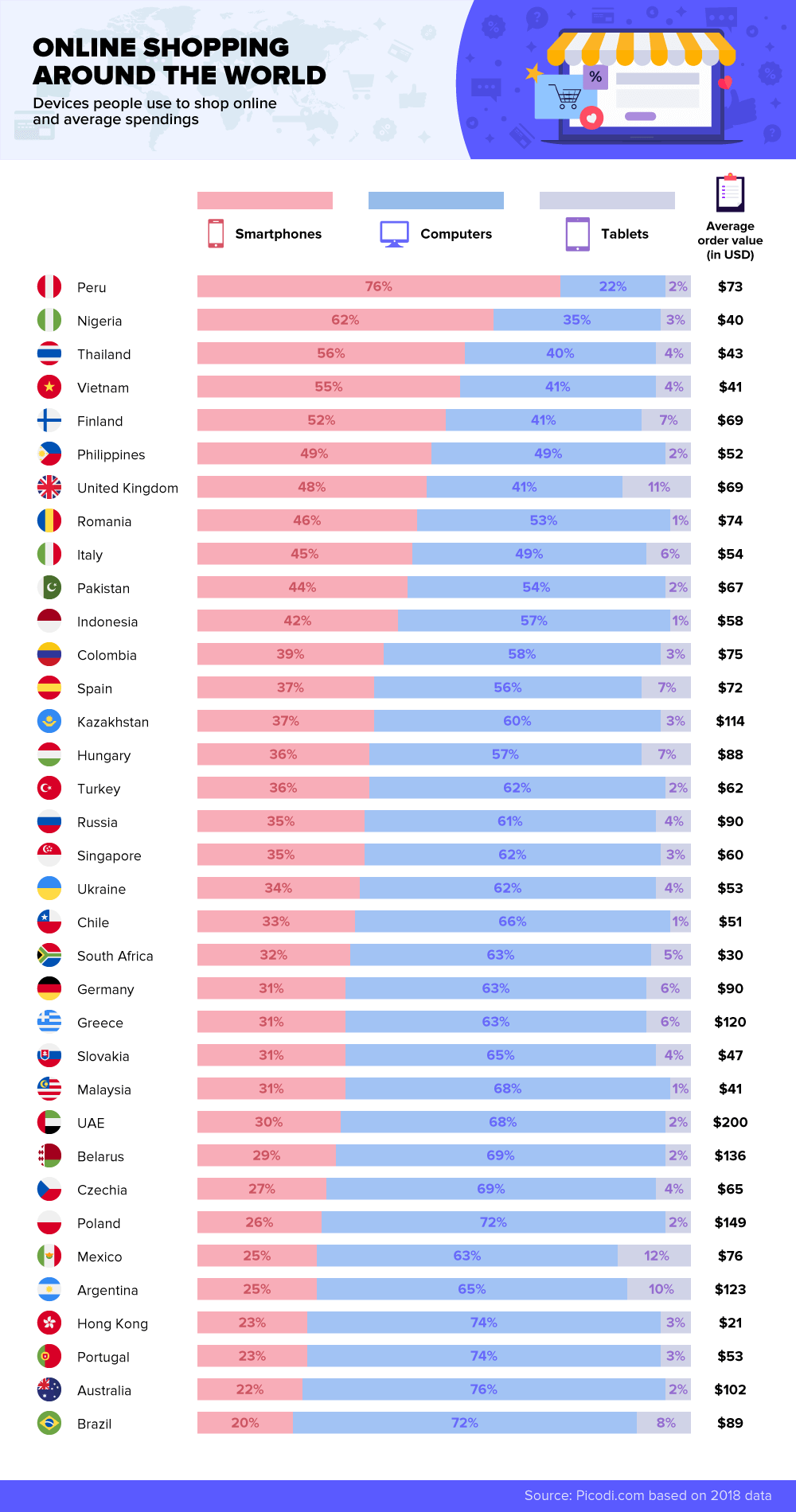 We analysed data from 35 countries and compared the devices people use to shop online and the average order value. The United Arab Emirates, with only 30% of their orders made on mobile devices, is among the countries where desktop shopping takes the lead.

Peru tops the ranking with 76% of online purchases made with the use of smartphones. Close behind are Nigeria and Thailand (62% and 56%). Among countries that fall behind the UAE were Hong Kong and Australia with 23% and 22% respectively.

However, when it comes to the average order value, Emiratis with their $218 (801 AED) top the ranking — the world’s average is US$79. It looks like Hungarians and Turks don’t like to spend a lot in one go. They are at the bottom of the ranking with US$32 and US$38 respectively.

Are you willing to share the information and infographics about shopping online in the United Arab Emirates with your readers? Feel free to use all the data and infographics presented in this report for both commercial and non-commercial purposes as long as you indicate the author of the research (Picodi.com) with a link to this subpage.