Every year, more than 500,000 people die in the United Kingdom. There are no official statistics regarding types of funeral, but the estimates indicate that cremations amount to as much as 78 per cent of all deaths.

Picodi.com analysis team examined the costs of funeral and how different the traditional burial is from cremation in terms of expenditure. We also investigated how various governments help to cover the funeral costs: the UK is one of the countries which offer funeral benefits, but the aid sum is not among the highest. 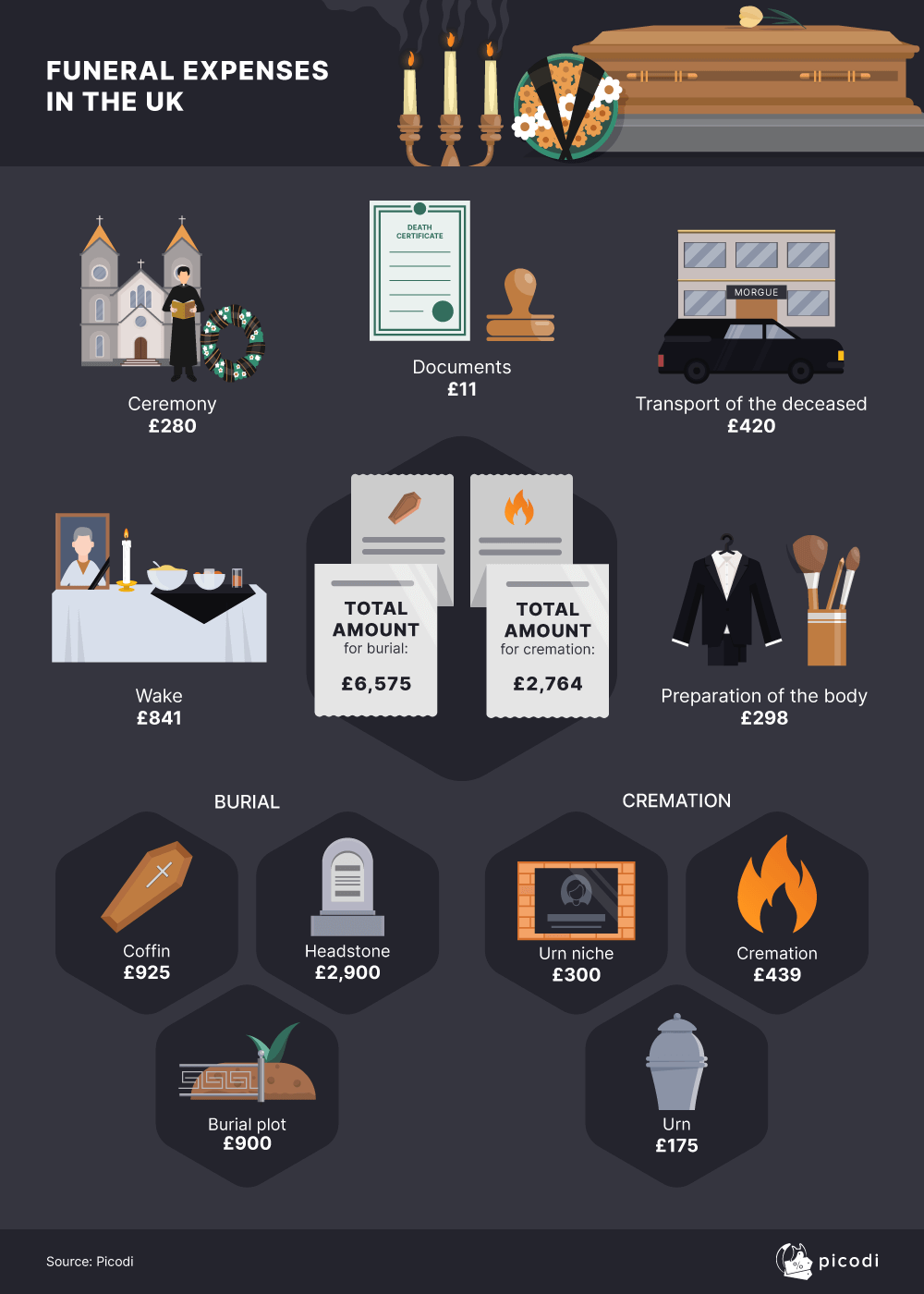 The traditional burial and cremation are very different, but some costs apply to both types of ceremony. First, there are administrative costs: death certificate and some other necessary documents cost around £11. Then the person responsible for the funeral has to pay around £298 for preparing the body: the deceased must be washed, embalmed, and dressed. Of course, the body has to be transported, both during the funeral (renting a hearse), and from the place of death to mortuary — which, in total, is around £420.

The funeral itself usually consists of a ceremony (either religious or secular) and a wake. The former costs around £280. This sum covers the rental of the venue or church for the memory service and paying the celebrant. A wake can be much more expensive, with a meeting for thirty people costing about £841.

If you opt for a traditional burial, you have to factor in the price of the coffin, which is around £925. You should expect to pay a similar sum for the burial plot — £900. The biggest expenditure is the gravestone: a simple one costs around £2,900.

In the case of cremation, you’ll obviously need to pay for incineration, which is about £439 (including a simple coffin). Other necessary expenses include an urn for the ashes which costs around £175. Although you can spread the ashes in the place of your choice, if you want to preserve them in a columbarium, you would have to pay about £300 for the urn niche.

If you compare the total expenses for the two ceremonies, it turns out that cremation is a lot cheaper: a traditional burial costs around £6,575, while the cremation is only around £2,764. 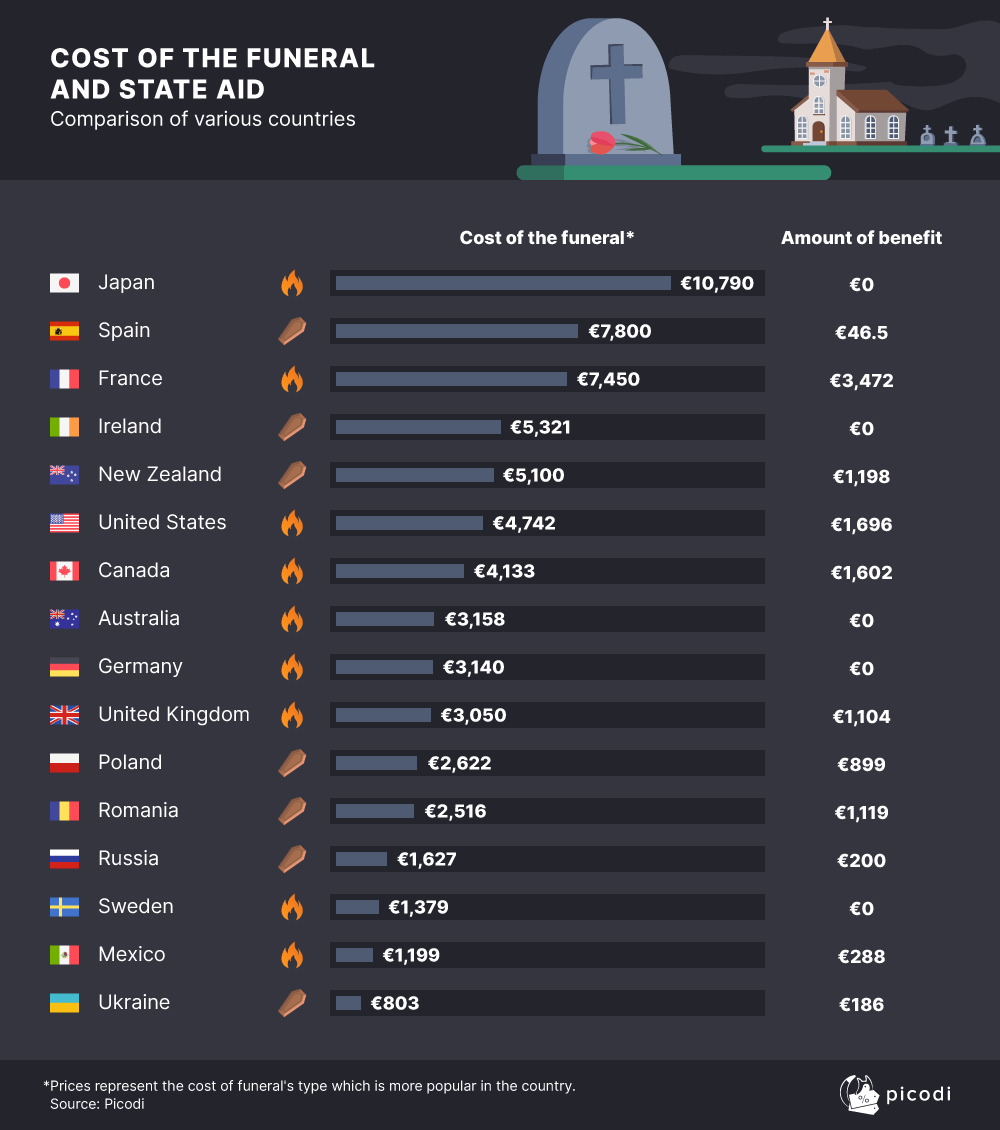 We checked what kind of funeral is the most popular in 15 various countries and how much it costs. Thanks to that, we can see how the United Kingdom compares to others.

Funeral costs are the highest in Japan, where you need to pay around €10,790 total and cannot count on state aid. Two European countries, Spain and France, ranked just behind Japan — funeral arrangements there cost €7,800 and €7,450 respectively. Interestingly, although there is a funeral benefit available in Spain, it amounts to only €46.5, which is less than 1 per cent of funeral expenses.

On the other end of the ranking there is Ukraine — in this country, €803 is enough to arrange a funeral. It’s also quite affordable in Mexico, where the total cost is about €1,199. Swedes spend around €1,379 on organising the last farewell, thanks to a mandatory burial fee paid through their taxes, which covers most of the funeral expenses.

This report is based on the local prices of different elements of funeral published on websites of funeral homes, churches, and cemetaries. Funeral benefits data comes from websites of governments and the report takes into account the highest amount available. For the currency conversion, we used the average exchange rate for August to October 2020 according to Google Finance.