The pivotal role of the internet in modern life is emphasized by the United Nations which issued a resolution claiming that access to the internet is one of the basic human rights and calling on Member States to prevent the digital divide.

How expensive is the internet nowadays? Where is surfing the net the cheapest? In which countries is super-fast internet easy accessible? And is the internet in the United Kingdom really inexpensive? Picodi.com analysts looked into pricings of 233 biggest fibre internet providers in 62 countries and answered these questions.

The comfort of using the internet depends on many factors. Among them, there is a nominal speed, the network’s technology, a wireless interference, network load, but also the quality of the visited website and the distance to its hosting server location.

Oddly enough, in some countries, like Poland, Romania, France or Singapore, major internet providers do not offer such a “low” speed. In Poland and Romania, the lowest plan available is 150 Mpbs, in France — 200 Mbps, and in Singapore — 500 Mbps. On the other hand, in countries like Tajikistan, Turkmenistan or Vietnam, the 100 Mbps speed is not yet widely available. 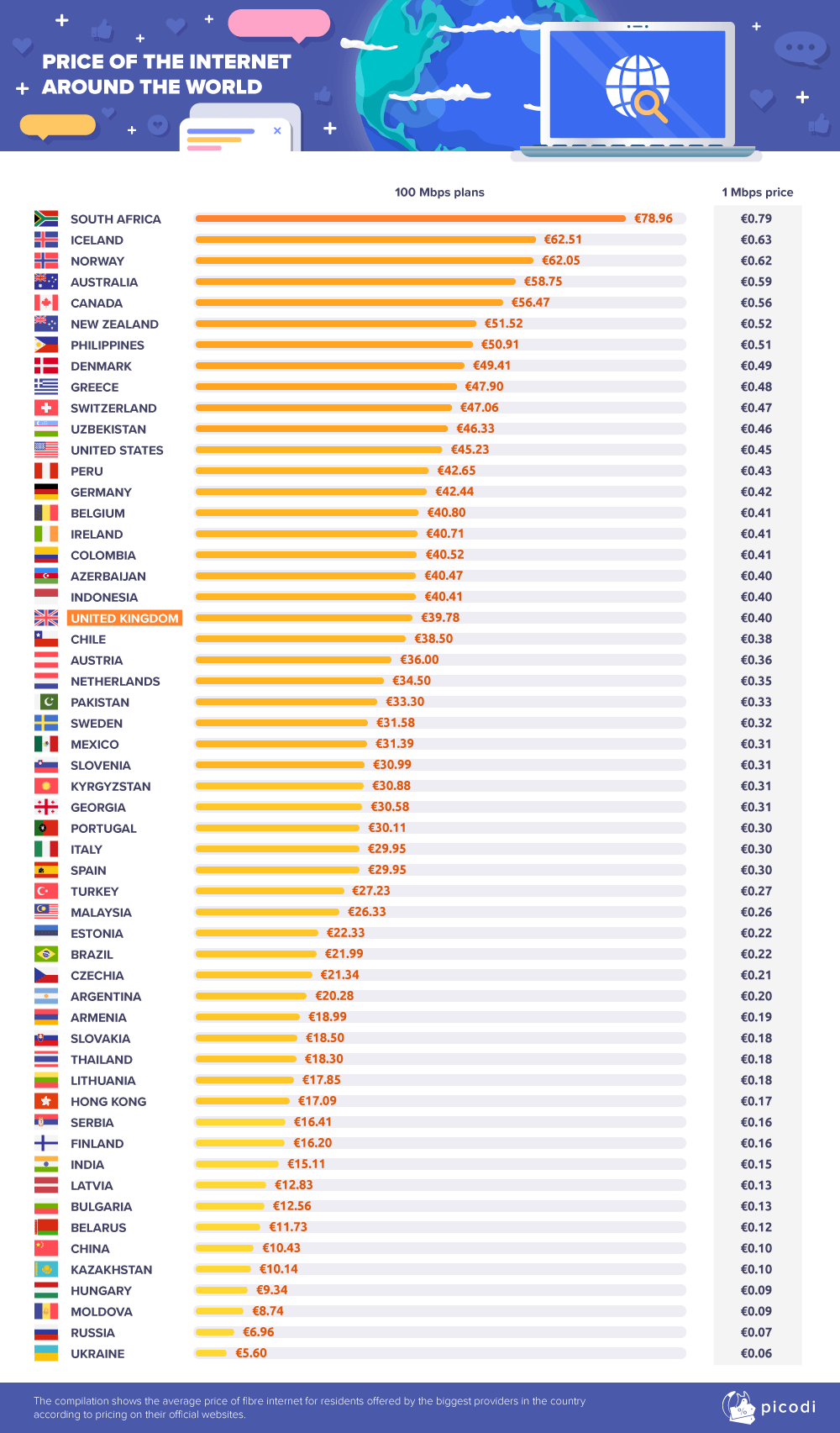 Among the considered countries, the biggest price for 100 Mbps internet was noted in South Africa — €79 a month. People living in northern countries, like Iceland or Norway, pay over €62 a month.

Internet for up to €20 a month

We decided to present the data in a different way: what internet speed can you afford for the equivalent of €20 (around £16) per month? Out of 62 countries included in the report, 20 could not be ranked. Australia, Brazil, Germany, Switzerland, Chile, Italy, Portugal, USA, and RSA — in these countries, the unlimited fibre internet for residents from major providers costs more than €20 a month. The infographic below shows the results for specific countries. 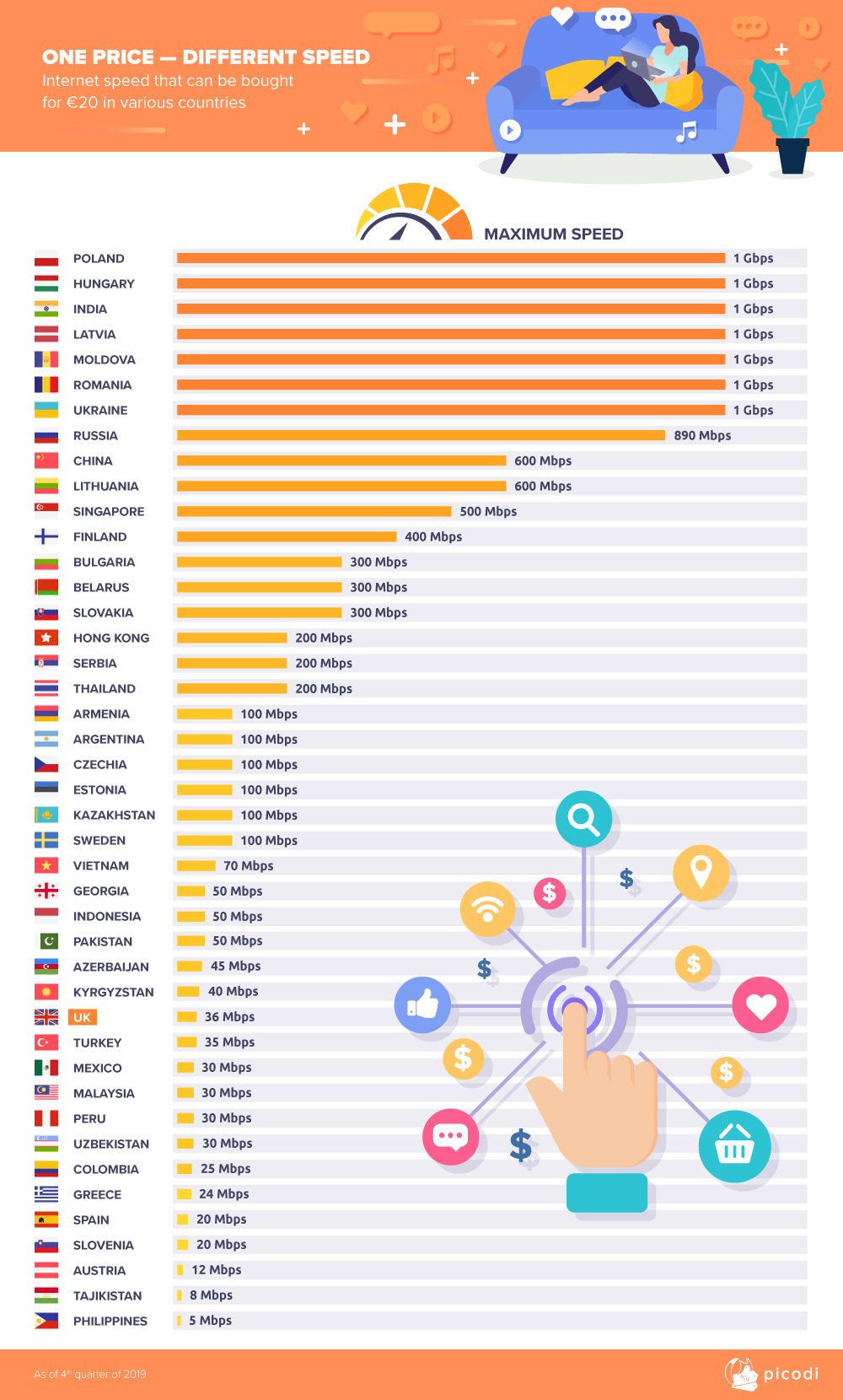 The highest internet speed, which turns out to be 1 Gbps, can be found in Poland, Romania, Moldova, India, Hungary, Latvia, and Ukraine, with the price under €20 per month. Such amount of money is enough to afford a super-fast internet plan in Russia (890 Mbps), China and Lithuania (600 Mbps in both).

In the United Kingdom, you could afford 36 Mbps internet speed under €20 per month. 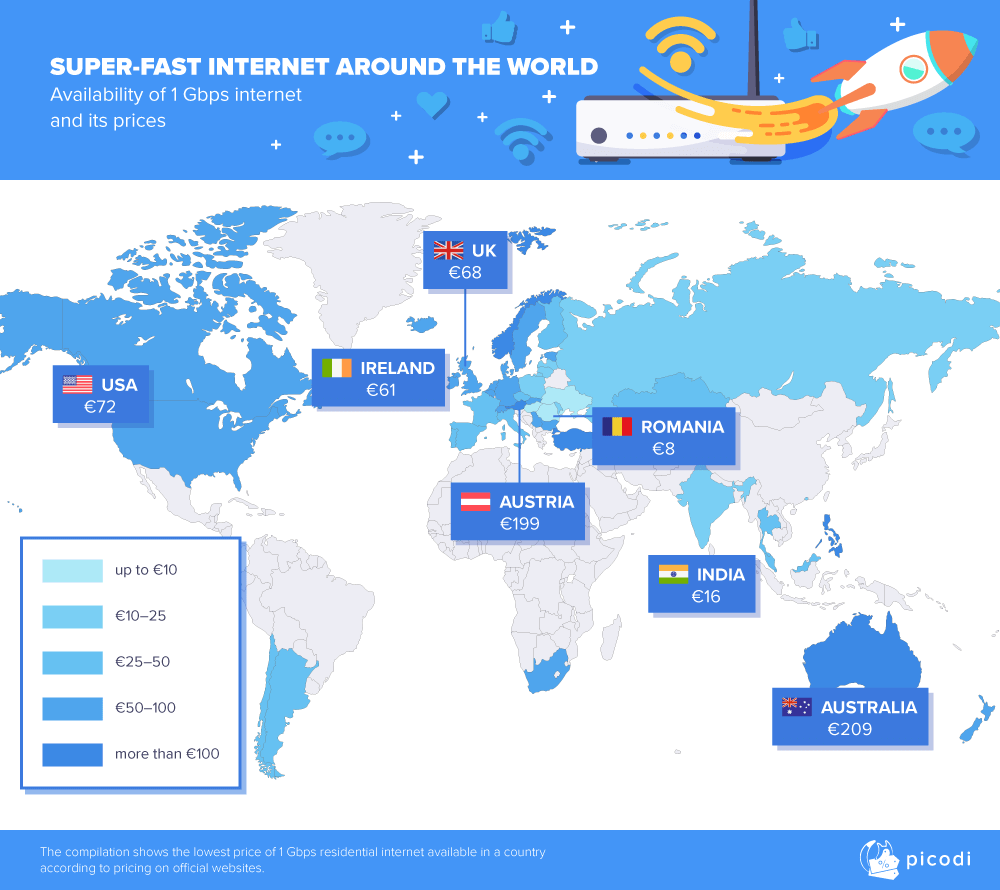 According to Picodi.com data, in many countries, 1 Gbps internet is a high-cost luxury. In 22 out of 44 countries where providers offer such speed, a monthly price exceeds €50. Super-fast internet is the most expensive in Austria and Australia, at €199 and €209 respectively. On the other hand, the cheapest 1 Gbps internet is available in Romania, at just €8 per month. In the United Kingdom, the 1 Gbps plan is on the pricey side — €68.18 a month.