Affordability of rental housing in the UK

In autumn, the demand for rental housing reaches its peak: the holiday season is ending, business activity is growing, students are looking for an alternative to dormitories. Picodi.com analysts investigated the offers on the real estate market in the UK, compared them with the average wages and made a ranking of housing affordability.

Among 50 cities considered in the study, the highest average cost of renting a one-bedroom apartment in early September 2020 was noted in the capital — around £1,450 per month. Brighton and Hove ranked second (£900), followed by Milton Keynes in the third place (£895). On the other hand, the cheapest place to rent a flat is Northumberland, Wakefield, and Dudley. In these cities, the average price of a one-bedroom flat is £325.

It is worth noting that the average wages vary from city to city. It’s hardly surprising that London takes the lead in terms of earnings with an average of £2,474 a month, according to ONS. Interestingly enough, even though Brighton and Hove follows the capital in the rent costs ranking, it’s only 12th in terms of average monthly salary.

Affordability of rent in 50 cities 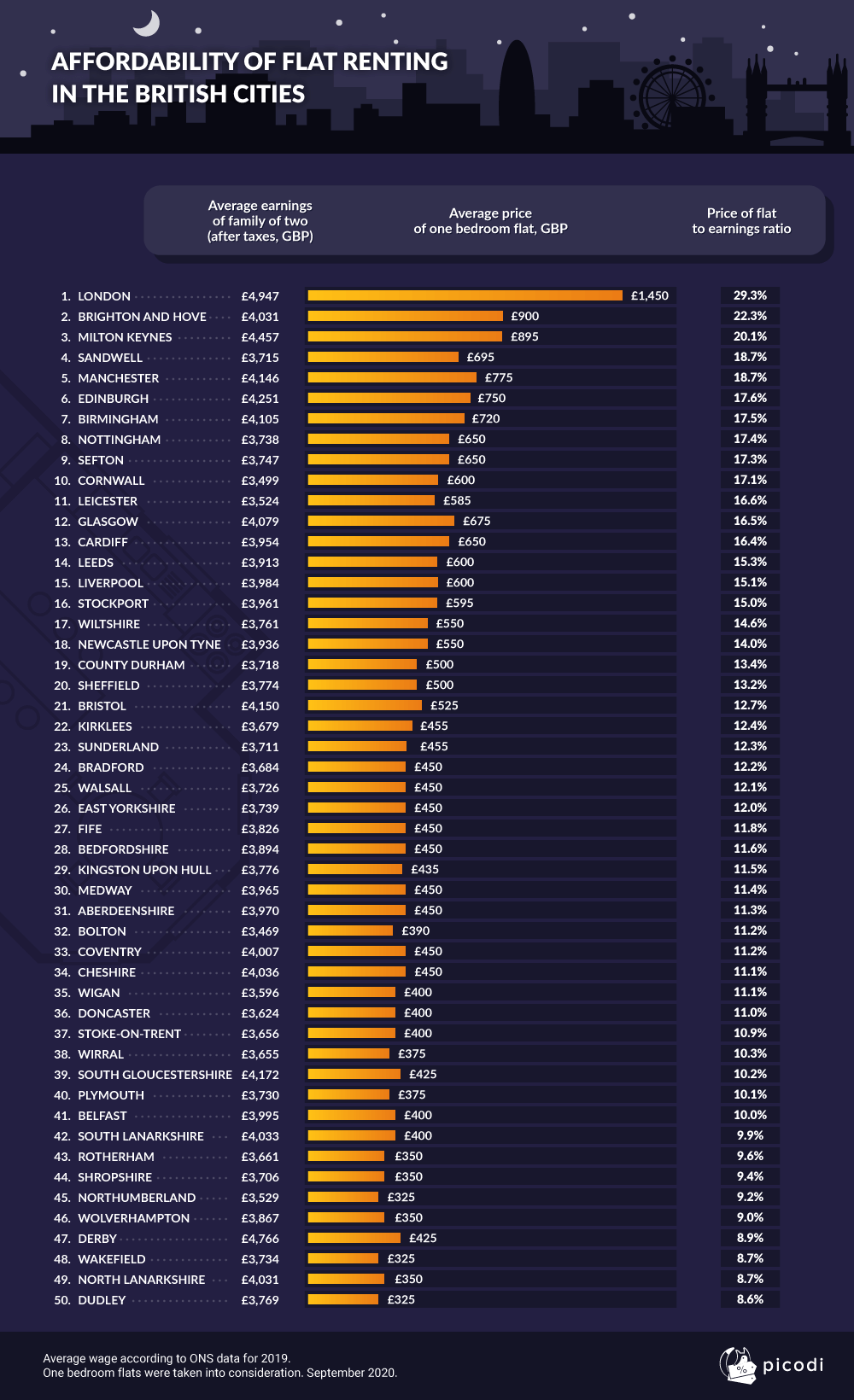 The study showed that the best rent to average wage ratio is in Dudley. In this city, an average family of two working people would spend only 8.6 per cent of their monthly income on rent. With the cheapest average rent among 50 cities, Dudley also ranks 29th in terms of monthly salaries. Among the most affordable cities for tenants are also Wakefield and North Lanarkshire (both 8.7 per cent).

Londoners, who found themselves at the top of the ranking, would have to pay astounding 29.3 per cent of their pay to the landlord for their one-bedroom flat. It is not surprising, taking into account the popularity of the British capital among Europeans. Brighton and Hove and Milton Keynes followed with 22.3 and 20.1 per cent respectively. Sandwell and Manchester rounded out the top five — tenants in these cities would have to spend 18.7 of their pay to rent a one-bedroom apartment.

The ranking is based on the average monthly costs of renting a one-bedroom apartment in early September 2020 based on local offers published on property portals. As for the average wages in the respective cities, they come from Office for National Statistics for the period of April 2019 (the latest available data). The biggest 50 cities in the United Kingdom in terms of the population were included in the report.

Would you like to share information about the affordability of rental housing in the UK? Feel free to use all the data and infographics presented in this report for both commercial and non-commercial purposes as long as you indicate the author of the research (Picodi.com) with a link to this subpage. If you have any questions, please contact us: research@picodi.com.