The first mentions of make-up date back to ancient Egypt. Even then, people used the prototype of eyeliner, and both men and women wore make-up. Since that time, cosmetics and the perception of make-up itself have diametrically changed. Nowadays, trends come and go every season, and the preferences of Singaporeans are constantly evolving.

How much money do Singaporeans spend on cosmetics yearly? Which factors determine the purchase of cosmetics? How do men and women feel about eco cosmetics? And how do we compare to other countries? Picodi.com analysis team answered these and other questions related to the cosmetics market. 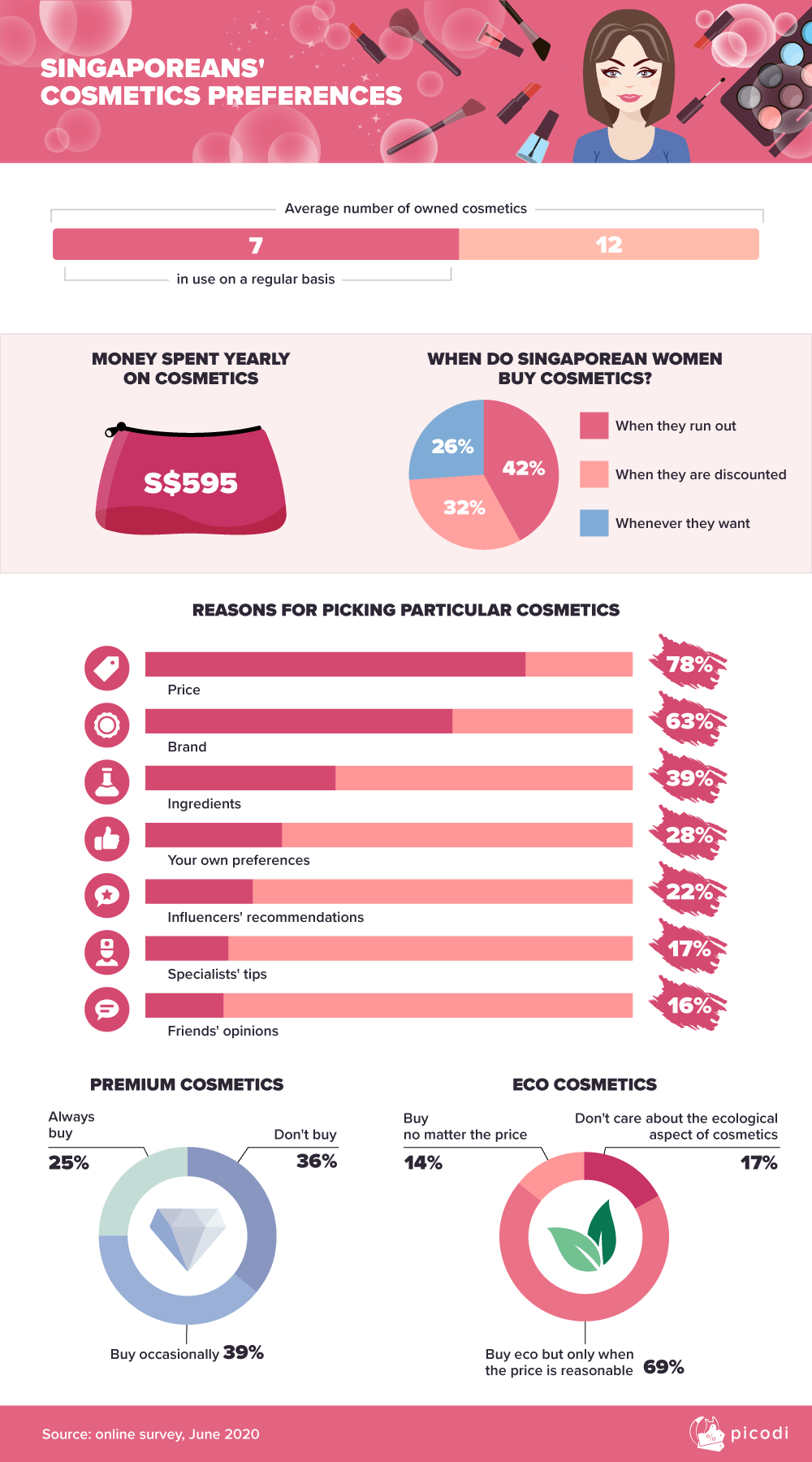 Singaporean women’s’ toiletry bags are quite spacious — on average, they contain as many as 12 beauty products. It is no wonder that a typical British woman spends around S$595 in a year on cosmetics. On the other hand, among these 12 cosmetics, only 7 are in regular use. It could be explained by the fact that 32 per cent of the surveyed women buy cosmetics when they are discounted, in reserve. 42 per cent buy cosmetics when they run out and 26 per cent whenever they feel like it.

How do Singaporean women choose their cosmetics? Most of the surveyed women (78 per cent) chose price as a major factor determining the purchase. Brand of the cosmetic is crucial for 63 per cent of the surveyed respondents, and 39 per cent chose ingredients. Less important are specialists’ tips (17 per cent) or friends’ opinions (16 per cent).

Considering the fact that most of the respondents consider price as the most important factor, it is not surprising that only 25 per cent of women prefer premium cosmetics, more expensive than the regular ones. 39 per cent allow themselves to buy such cosmetics occasionally, and 36 per cent don’t buy them at all. Price is also the decisive factor for choosing between regular and eco cosmetics, which became quite popular in recent years. The majority of the surveyed women (69 per cent) declared that they pick green cosmetics only when the price is reasonable. 14 per cent always buy eco cosmetics, and 17 per cent don’t have any interest in the ecological aspect of beauty products. 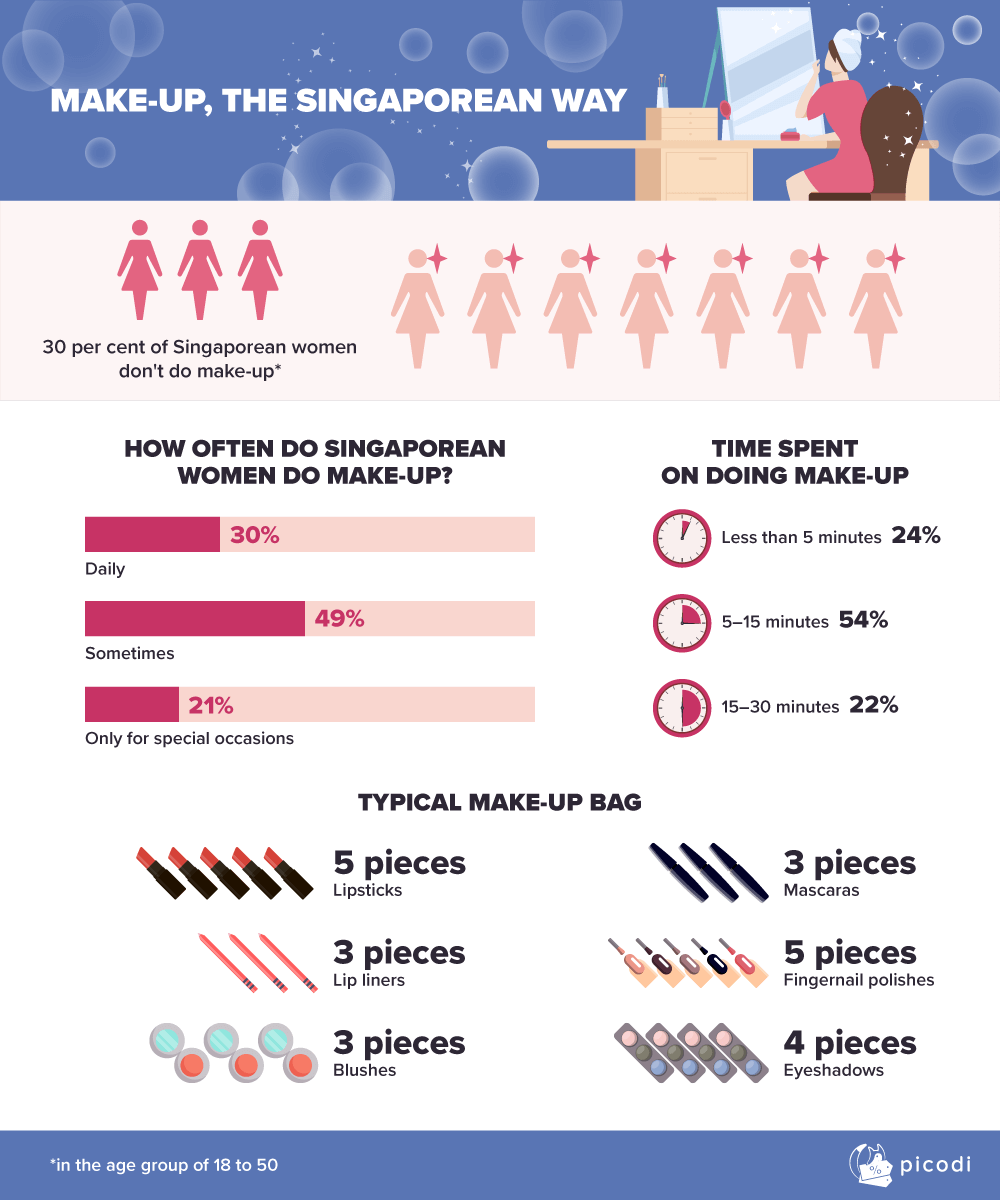 For many women, make-up is an integral part of the morning routine. However, almost one-third of the surveyed Singaporean women do not wear make-up at all. Among those who do, 30 per cent wears it daily. 49 per cent does make-up sometimes, and 21 per cent does it only for special occasions.

How much time do Singaporean women usually spend in front of the mirror? Among the women aged 18 to 50, 54 per cent spend 5 to 15 minutes on make-up, and one-fourth less than 5 minutes. 22 per cent of surveyed Singaporean women take much more time doing make-up — as much as half an hour. 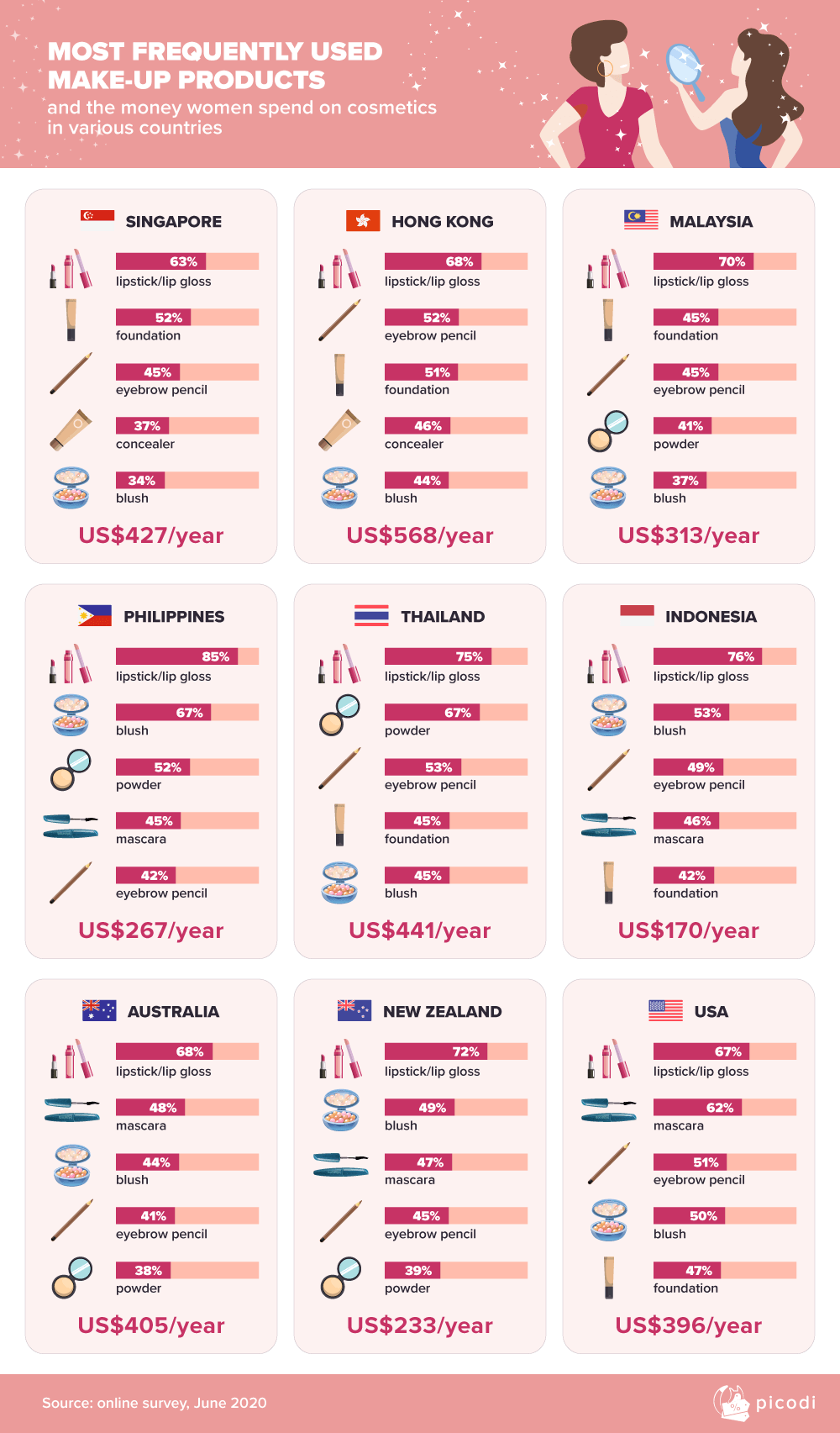 In Singapore, the most popular beauty products are lipstick, foundation, eyebrow pencil, concealer and blush, and women spend around US$427 a year on cosmetics. How about our neighbours?

Malaysians spend less than Singaporeans — US$313 Their favourite cosmetics, besides lipstick, foundation, eyebrow pencil, and blush, is powder.

Surprisingly, American women spend much less than Singaporeans, around US$396 a year. With US$568 spent on cosmetics each year, women in Hong Kong are far ahead. 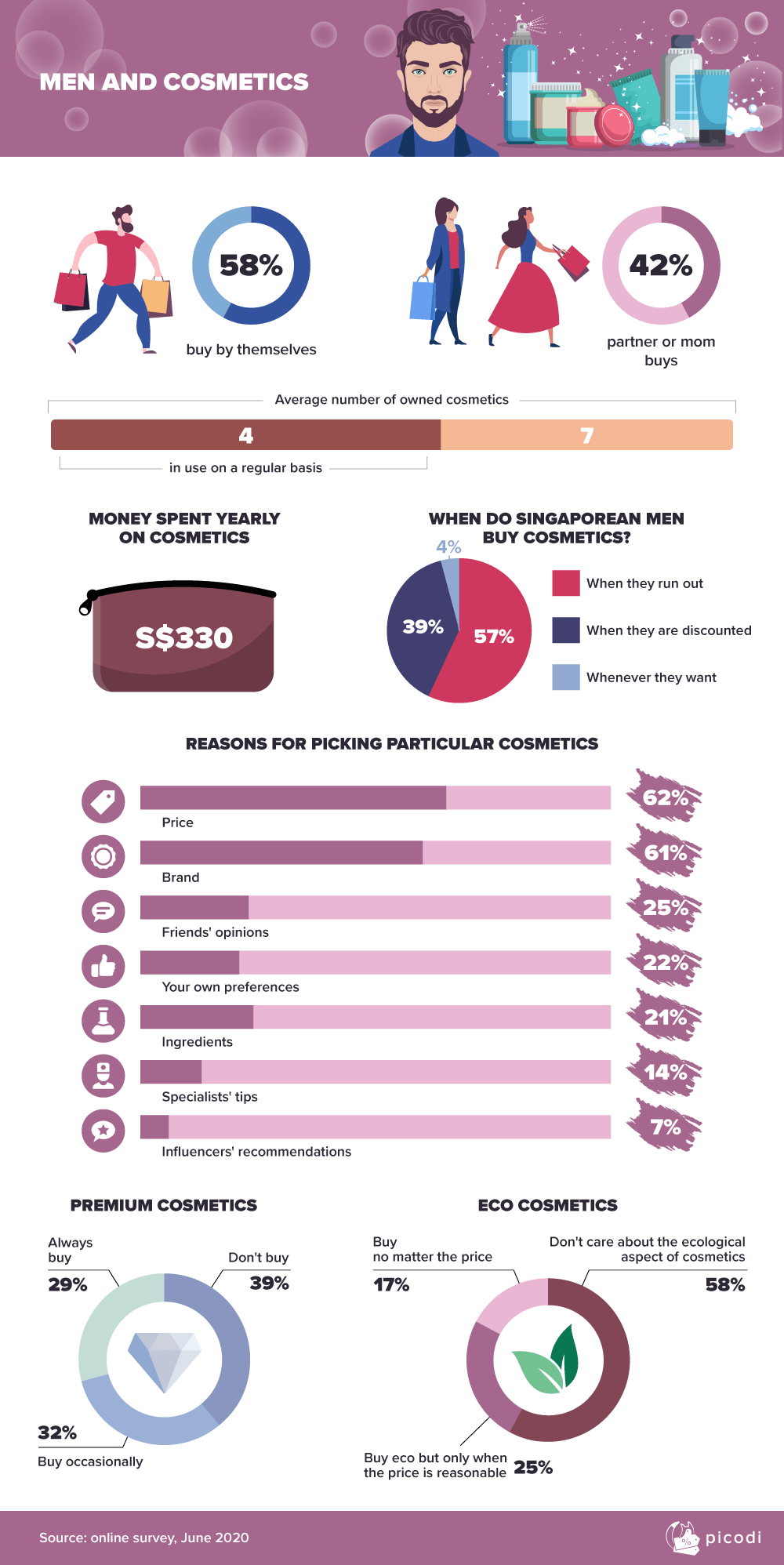 How do men feel about cosmetics? First of all, they spend much less money on cosmetics than women — S$330 a year. They also own fewer beauty products (7 pieces), although they only 4 use regularly. What is interesting, only 58 per cent of the surveyed men buy cosmetics by themselves — the remaining 42 per cent admits that it is mom or partner who buys cosmetics for them.

Singaporean men are also less likely to buy premium cosmetics — 39 per cent claim that they never buy them and 32 per cent do only occasionally. When it comes to eco cosmetics, more than half of the surveyed men declared that they do not care about their ecological aspect. One-fourth buy such cosmetics when the price is reasonable, and 17 per cent prefer eco products no matter what.

Would you like to share information about preferences toward cosmetics in Singapore and other countries? Feel free to use all the data and infographics presented in this report for both commercial and non-commercial purposes as long as you indicate the author of the research (Picodi.com) with a link to this subpage. If you have any questions, please contact us: research@picodi.com.