How much time would it take to read the worldwide bestsellers?

Picodi.com analytics counted how much time a marathon of reading the world’s bestsellers would take. 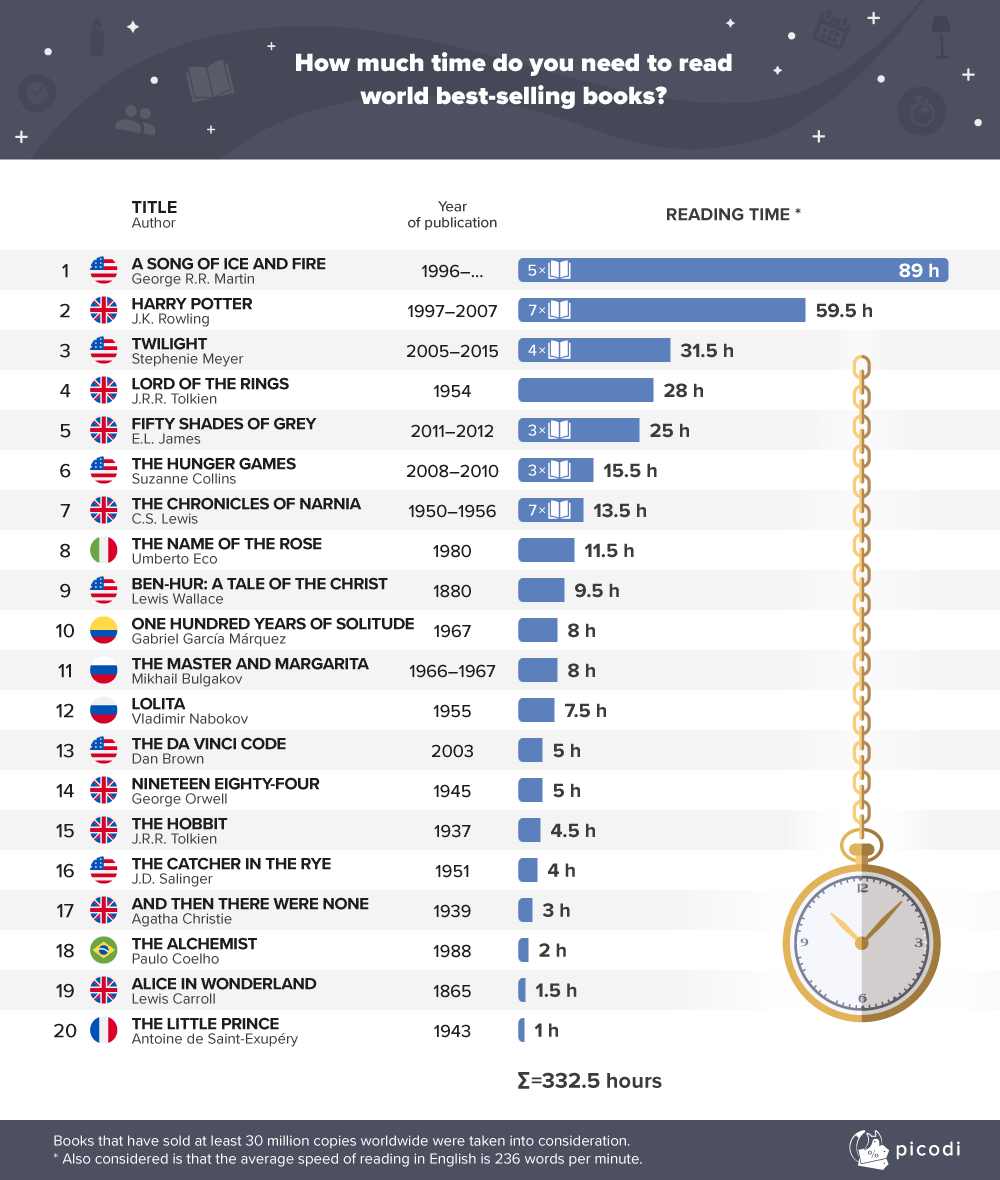 Frequently, movies and tv series which become successful in cinemas and streaming platforms are film adaptations of famous books. “Game of Thrones”, one of the most viewed tv series, is no exception. It was created based on George R. R. Martin’s fantasy novel “A song of ice and fire”. The final two books in the series are yet to be released but fans can still devour the five which are already out. The journey around the land of Westeros world would take around 89 hours for an average reader — it’s the longest time in this comparison.

In second place, there is the world’s most famous wizard — Harry Potter. Millions of people watched the movies based on books written by J. K. Rowling. Reading about this wizard world would take 59.5 hours.

In third place, we have a series about vampires’ love in the modern world by American writer Stephenie Meyer “Twilight” — 4 volumes are included which make 31.5 hours of reading.

The books which require the least amount of time include such titles as “Little Prince” by Antoine de Saint-Exupéry (1 hour), “Alice in the Wonderland” by Lewis Carroll (1.5 hours) and “The Alchemist” by Paulo Coelho (2 hours).

The list of the world’s bestselling books is dominated by British and American authors. However, not only are their works sold in millions of copies; among the best selling books are also “The Name of The Rose” by Umberto Eco (Italy, 11.5 hours), “One Hundred Years of Solitude” by Gabriel García Márquez (Columbia, 8 hours), as well as “The Master and Margarita” by Mikhail Bulhakov (8 hours) and “Lolita” by Vladimir Nabokov (7.5 hours) — both Russian.

If someone would read 8 hours daily then reading all the bestsellers would take 42 days.

The ranking of world bestsellers includes titles sold in more than 30 million copies around the world. The time of reading was based on the assumption that an average reading time in English takes 236 words per minute.