Black Friday in the eyes of Pakistanis

Originally, Black Friday used to be known only in the United States. However, in the last few years, the event has spread to other continents, including our country. Pakistanis have welcomed with opened arms the opportunity to participate in huge sales and make great savings.

In which part of Pakistan is Black Friday the most popular? What are the differences in attitudes toward sales among men and women? How much money are Pakistanis willing to spend and on which products? Where and when do Pakistani consumers shop? Picodi.com analysts look closer into the Black Friday phenomenon and answer these questions. 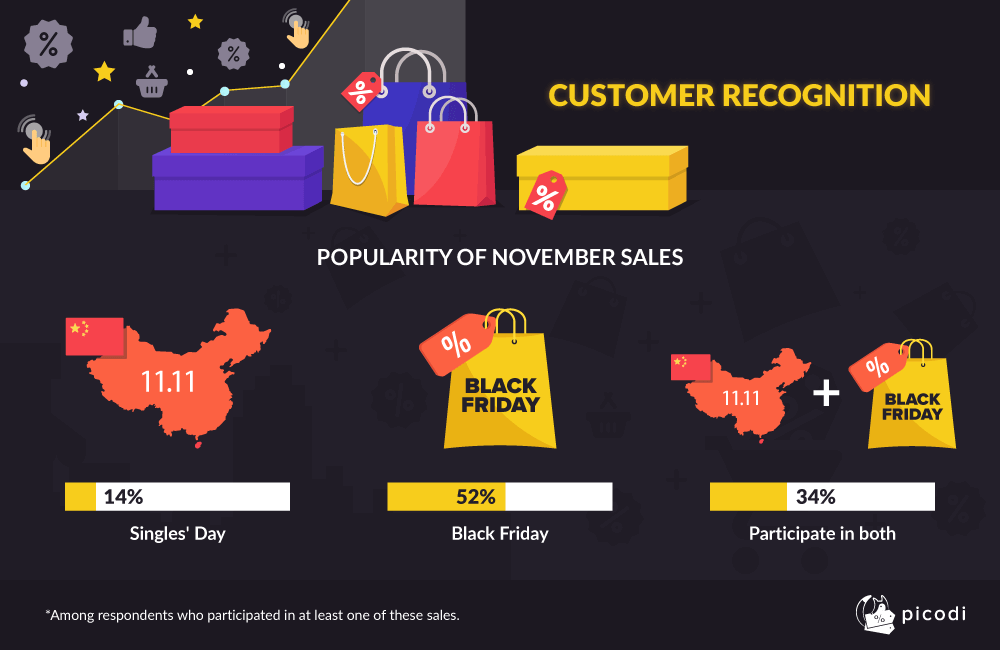 Black Friday is not the only shopping holiday in November. Although still not as prominent in Pakistan, in many countries Singles’ Day is celebrated on November 11th. Named after the multiple “one” numbers in the date, representing people who are single, Singles’ Day originated in China. The high discounts offered on that day attract huge crowds, especially in Asia. 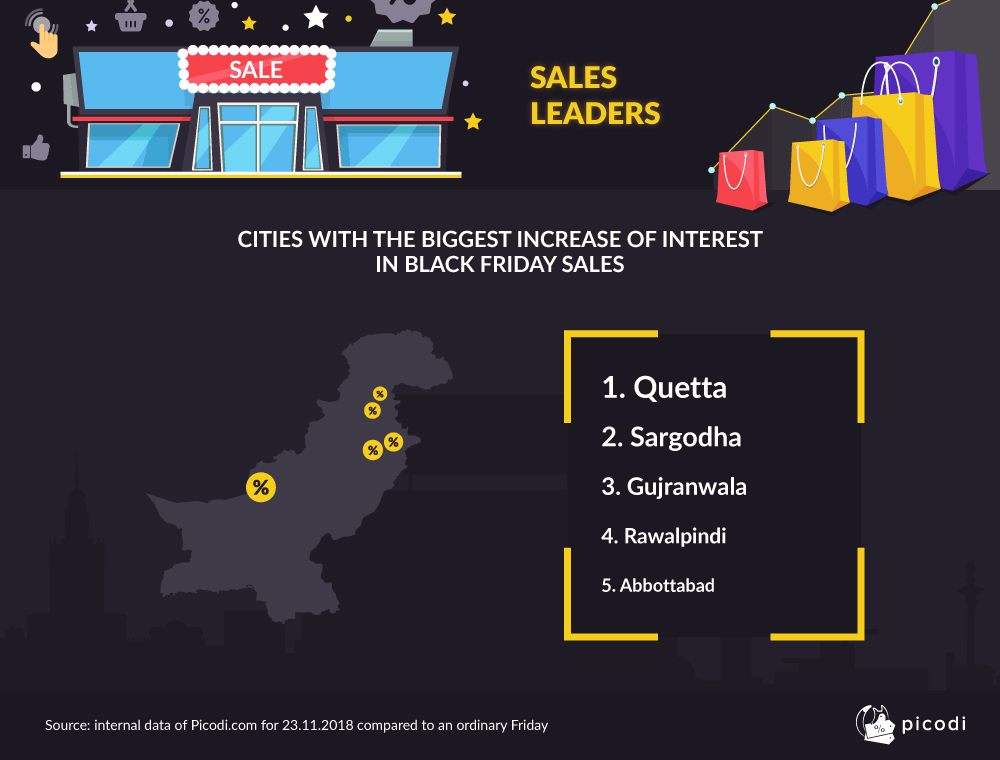 Although Black Friday is celebrated throughout Pakistan, in some cities people anticipate it more than in others. With the internal data from Picodi.com, we found cities where an increase of visits in online stores was the largest (compared to an ordinary Friday).

The biggest increase of interest in Black Friday sales was noted among citizens of Quetta. Black Friday has also gained significant popularity among residents of Sargodha and Gujranwala, who took the second and third place respectively. Rawalpindi landed in fourth place, followed by Abbottabad. 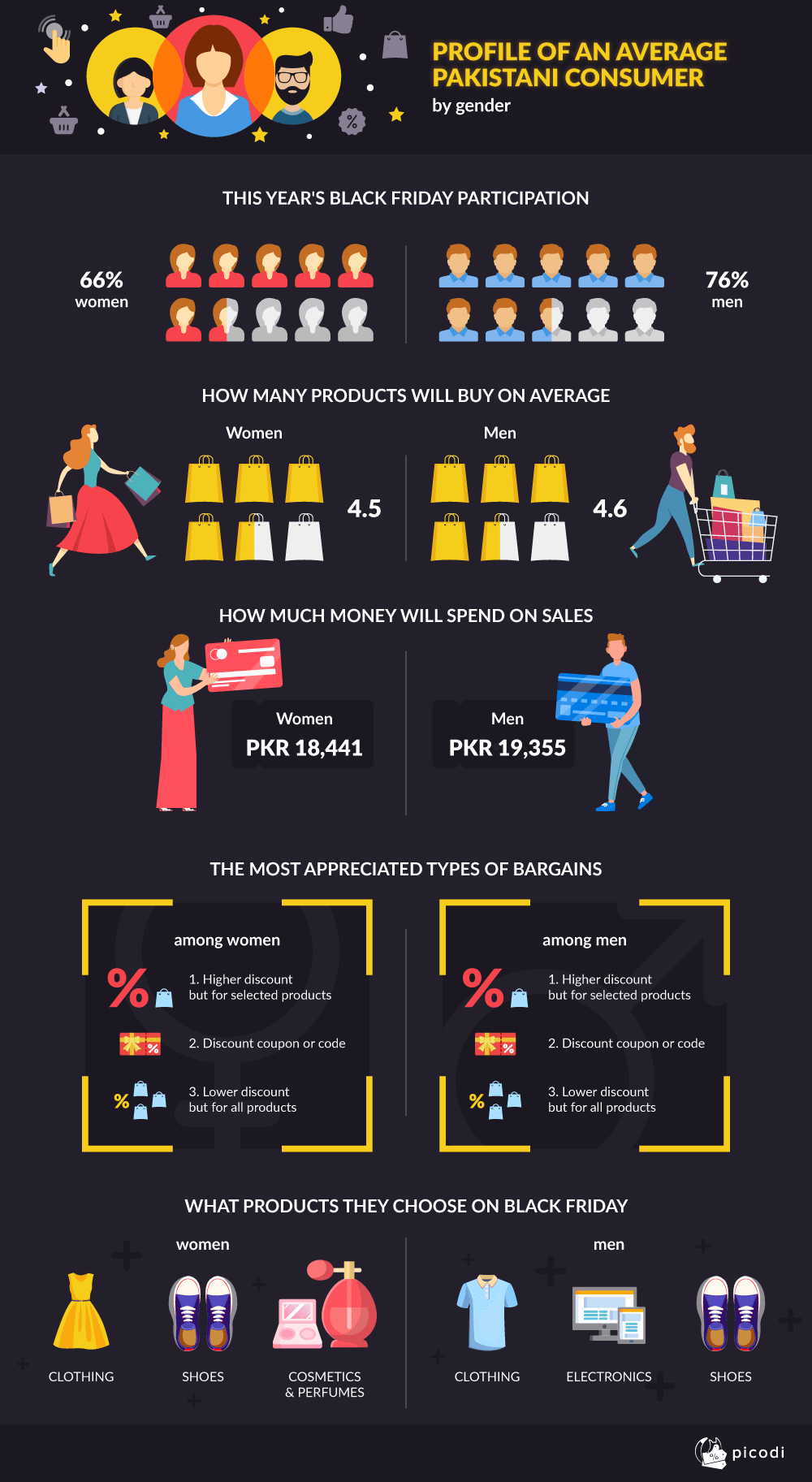 Black Friday sales are popular among both male and female citizens of Pakistan. As much as 66 per cent of female respondents are going to take part in Black Friday — it is 10 percentage points less than male shoppers.

Both women and men purchase around 4.5 products on average. However, men spend more money than women on Black Friday. An average woman is willing to spend around Rs 18,441, while an average man around Rs 19,355. Both male and female shoppers chose clothing and shoes as their top purchases. Other than that, men buy mostly electronics and women cosmetics and perfumes. What is more, women spend 31 per cent more time on shopping compared to men.

Black Friday is all about the promotions. In this case, men and women have similar preferences. The surveyed women and men choose a higher discount on selected products as their favourite type of promotion. The second place takes a discount coupon, and a lower discount on an entire range of products is in the third place. 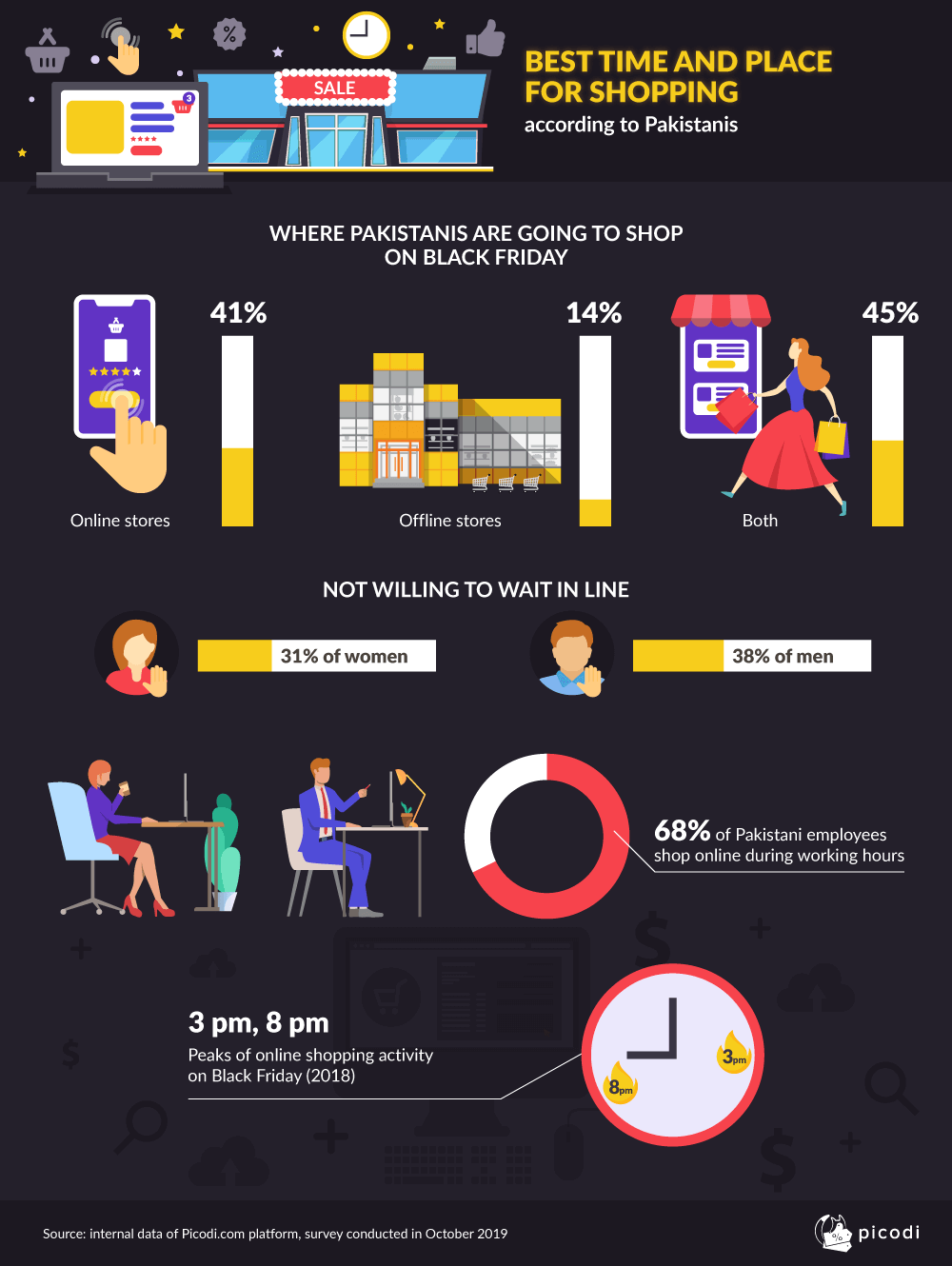 The popularity of online shopping is rising year after year, especially because of events such as Black Friday or Singles’ Day. 41 per cent of the surveyed Pakistanis are going to shop online on Black Friday. Almost half of the respondents (45 per cent) decided to shop in both online and offline stores. Only 14 per cent are going to shop exclusively in brick-and-mortar stores.

One of the reasons against shopping in malls is having to wait in lines. Although in Pakistan the situation is not as extreme, in some countries, special tutorials are created on how to endure the neverending queuing on Black Friday. Nevertheless, not everyone is willing to waste their time standing in line. Among Pakistani respondents, as much as 31 per cent of women and 38 per cent of men declare that they would rather give up on purchasing a product than wait in line.

Those who decide to place orders online do not have to worry about queues and can shop around-the-clock. On the Pakistani Internet, peaks of shopping activity fall at 3 and 8 PM. Consumers make purchases at home, during the commute, or even at work — 68 per cent of surveyed Pakistanis admitted that they buy while working.

Do you want to share information about Black Friday in Pakistan with your readers? Feel free to use the data and infographics from the report for both commercial and non-commercial purposes as long as you indicate the author of the research (Picodi.com) with a link to this subpage. If you have any questions, please contact us: research@picodi.com.