What impact do these trends have on Filipinos? Picodi Analysis Team decided to find out more about the habits and preferences of Filipino travellers. Read further to learn how often and with whom Filipinos travel, how much money they spend, what are the top travel destinations and Filipinos’ approach to organising trips. 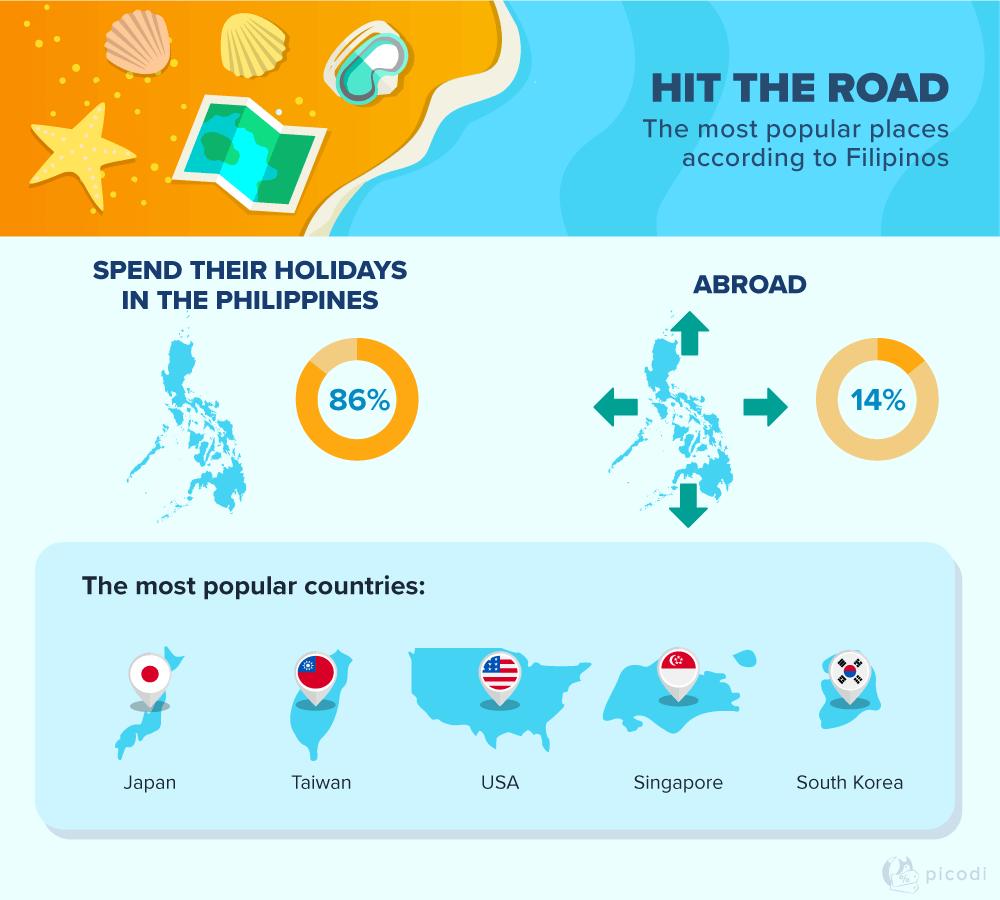 According to the survey results, the vast majority of Filipinos prefer domestic travels over going abroad. 86% of surveyed Filipinos declared that they would rather spend their holidays in their country when 14% opted for international travels.

Among those who decide to travel abroad, the most popular countries to visit were Japan, Taiwan, the US, Singapore and South Korea. It seems to be in line with UNWTO discovery that 4 out of 5 tourists travel within their region.

For those who prefer the Philippine landscape, among the top destinations were Manila, Batangas and Cebu.

When Filipinos go on their holidays? The shoulder season is gaining its fans around the world since it allows to visit the popular tourist attractions in decent weather and with more affordable prices. Its growing popularity was also noticed by Filipinos — 42% of respondents declared that they travel during the shoulder season. 47% chose the high season and the remaining 11% prefer to travel during the budget-friendly low season.

The question remains, how much money Filipinos are willing to pay for their leisure? According to the survey results, an average Filipino spends ₱13,171 per travel. However, only 3% of respondents said that they don’t try to save on trips — the rest of them have some smart tricks which make the whole venture more affordable. Among the most popular answers, 70% of surveyed Filipinos declared that they buy tickets in advance and 41% book their stay ahead of time.

It looks like Filipinos prefer shorter getaways as 57% of respondents claimed their trips last less than a week. 37% said that they spend around a week on holidays and only 6% two weeks or more. On the other hand, 33% of surveyed Filipinos go on holiday once a year and 45% twice a year or more frequently. 22% of respondents have the opportunity to go on a trip less than once a year.

With whom Filipinos spend their holidays? Majority of the surveyed travel with their family or partner (57% and 24% respectively). 12% go with friends and only 7% prefer to travel alone. 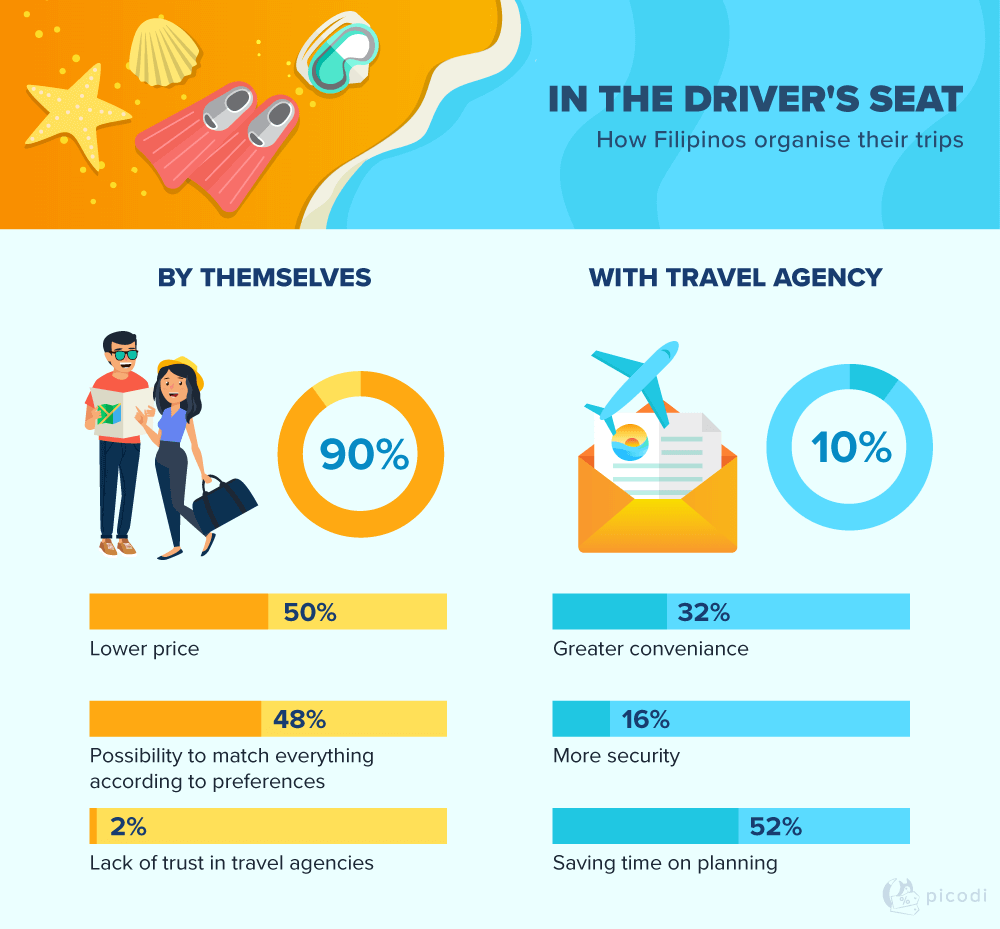 We already know when and where Filipinos travel but how do they organise their trips? The overwhelming majority of respondents (90%) prefer to organise everything by themselves while only 10% rely on travel agencies.

The main reasons for self-organised trips pointed out by Filipinos were the cheaper price (50%) and the ability to match everything according to preferences (48%). Those who travel with agencies mention that it saves time (52%) and is more comfortable (32%). 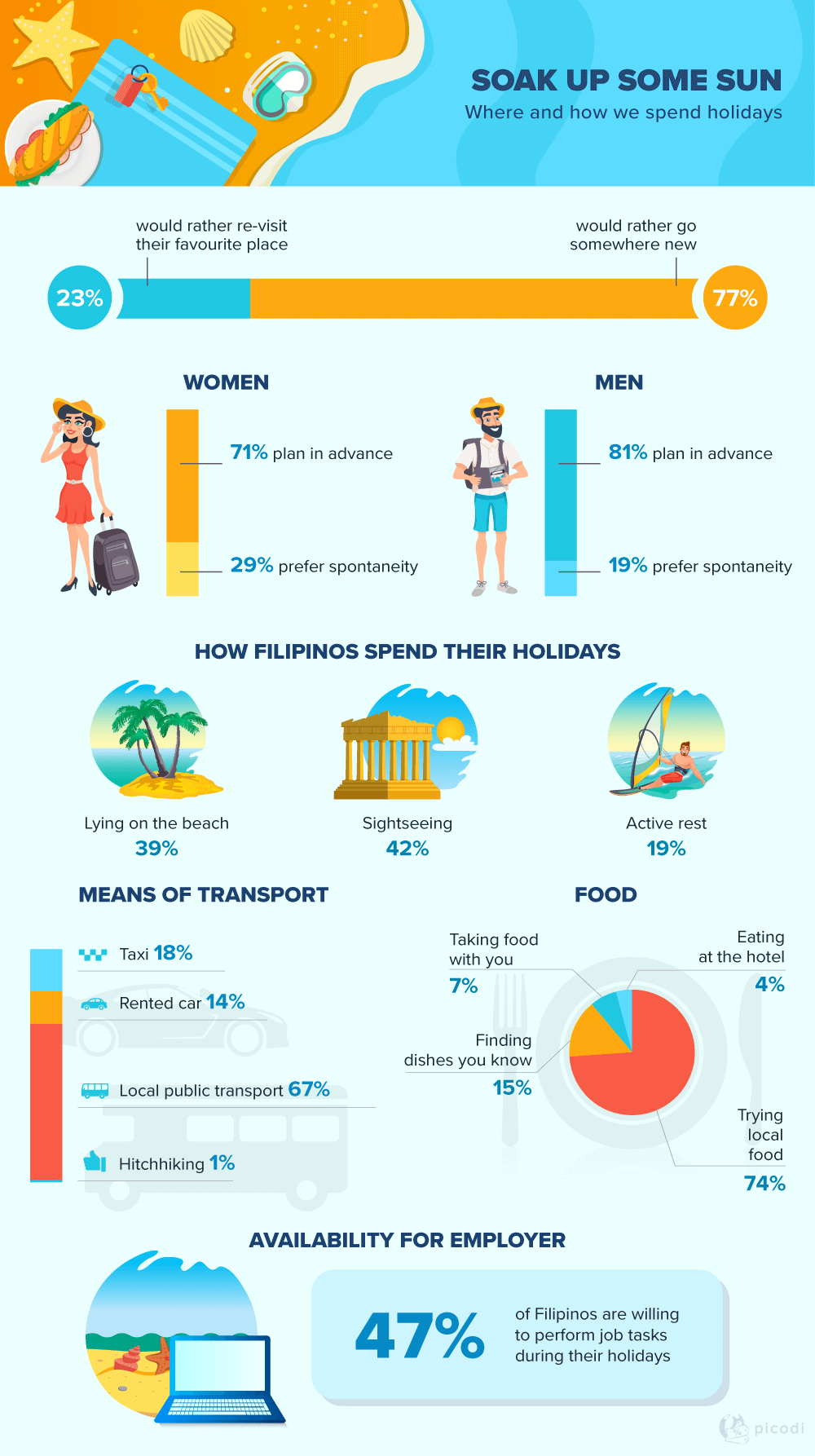 We asked Filipinos whether they prefer to go somewhere new or re-visit their favourite places. The results show that most of them (77%) would rather explore new places and only one-fourth of respondents (23%) chose to go back to places they already know.

When it comes to organising a trip, are there any differences between women’s and men’s attitude? It turns out that women are more spontaneous in the matter of organising journeys. Nevertheless, most people prefer to plan in advance — 81% of men and 71% of women.

Sunbathing on the ravishing Bali beaches, exploring the old alleys of Paris or surfing the waves of the Australian coast? When asked about the favourite way of spending holidays, almost half of the Filipino respondents (42%) chose sightseeing as their favourite activity. It was followed by lying on the beach (39%) and the least popular — active rest (19%).

When in Rome, do as the Romans do – the old proverb says. However, there are different approaches when travelling, especially when it comes to means of transportation or food. The surveyed Filipinos definitely like to experience new things — 67% declared that they use local public transport and 74% said that they try local food. Besides public transport, 18% of Filipino respondents prefer taxi rides and 14% would rent a car. As for food, 15% look for places that serve familiar dishes and 7% take their food with them.

In theory, taking a holiday is a way to rest from work. However, sometimes it’s impossible to break free from incoming calls or emails. It turns out that almost half (47%) of surveyed Filipinos are willing to perform job-related tasks during their holidays.

An average Filipino spends ₱13,171 per person on a holiday, which converted into USD amounts to $252. It places the Philippines quite low in the ranking. Still, most frugal travellers come from Indonesia and Pakistan — they spend $207 and $191 respectively.

Australians spend the most money on holidays — $1,505 per holiday. They are followed by Hongkongers and Finns who spend $1,021 and $897 respectively.

Are you willing to share the information and infographics about holidays in the Philippines and around the world with your readers? Feel free to use all the data and infographics presented in this report for both commercial and non-commercial purposes as long as you indicate the author of the research (Picodi.com) with a link to this subpage.