How did the prices of fruits and vegetables change in the Philippines?

Despite of the harvest time, many countries noted an increase in the price of goods, including food. Picodi.com analysts examined how the prices of the most popular fruits and vegetables have changed and created a ranking for 94 countries.

Prices of fruits and vegetables worldwide

In the comparison, we included the prices of potatoes, tomatoes, onions, lettuce, oranges, bananas and apples.

Of all 94 countries included in this ranking, the most significant price increase of these products can be experienced in Turkey. Here, the price of fruits and vegetables mentioned above increased by 72.2% in the span of seven months. The price of tomatoes increased the most – 121%.

Belarus and Russia are ranked second and third – with prices increasing by 33.4% and 27.3%, respectively. In Belarus, tomatoes increased in price the most (52%), while in Russia, the highest price increase can be seen in the case of potatoes (45%).

The Philippines ranked 77th in the ranking and the average prices of fruits and vegetables increased only by 1.8%. Compared with the prices in January, the price of tomatoes increased the most (5.9%).

Contrary to the general tendency, in the ranking, there are also countries in which the products mentioned above became cheaper, e.g. Dominicana, Ecuador and Bolivia. In these countries, fruits and vegetables became cheaper by 5%, 5% and 8%, respectively. However, in Ecuador and Dominicana, lettuce prices increased.

Prices in the Philippines

As mentioned above, from all of the considered fruits and vegetables, tomatoes became the most expensive. In January, the price of 1 kg of tomatoes was ₱71.41, and in July – ₱75.64. Other products increased in price slightly:

This gives us an average rise in prices of 1.8%. 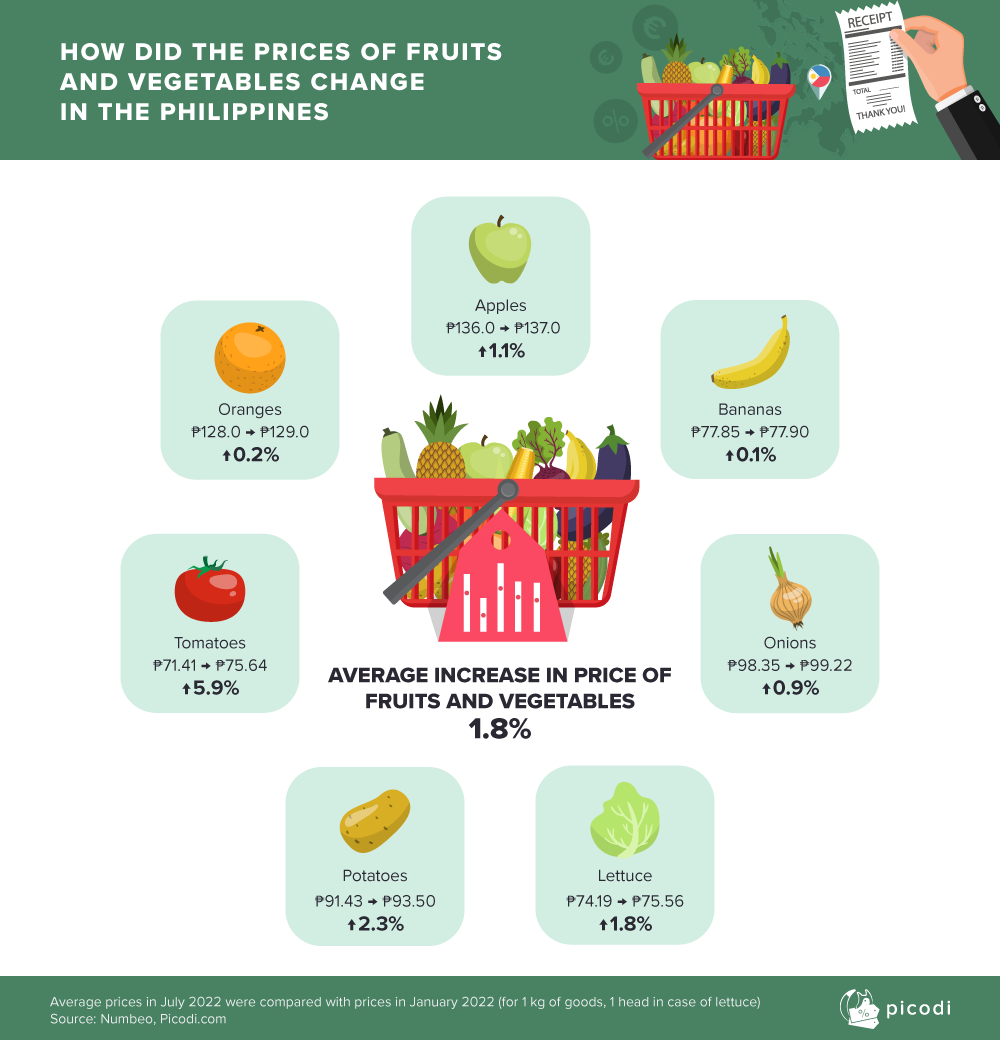 The prices of products included in this research are from Numbeo.com, where hundreds of thousands of consumers worldwide monitor the prices of products and services. The average rise in price was calculated for 1 kg of oranges, bananas, potatoes, onions, tomatoes and apples, and 1 head in case of lettuce.

The infographics, as well as all the statistics presented in the report, can be used freely for both commercial and non-commercial use, as long as you state the author of this research (Picodi.com) with a link to this subpage. If you have any questions, please feel free to contact us at: research@picodi.com