Picodi statement regarding the study „Minimum Wages Around the World”

After receiving comments and clarifications from the National Wages and Productivity Commission regarding the minimum wage in the Philippines, Picodi.com Analysis Team makes this declaration:

In the initial version of the report, the minimum wage used for the Philippines amounted to ₱5,922 (current daily minimum wage rate for Region I Ilocos for Agriculture, Non-Plantation worker and Agriculture 1-9 employees, amounting to ₱282 per day, multiplied by 21, the average number of working days in a month). In the same report, for Canada, Thailand and Vietnam, the mean values of all net wages of various administrative units were calculated. Thank you for pointing out this inaccuracy, for which we sincerely apologize. Below you can find the corrected version of the report.

We are also aware that the consumption patterns vary between the countries, climates, traditions, cities and even families. The basket consisting of eight categories of products is symbolic and serves only the statistic purposes of this study. It was not our intention to illustrate the actual eating habits in the researched countries but to compare the spending on these particular products. 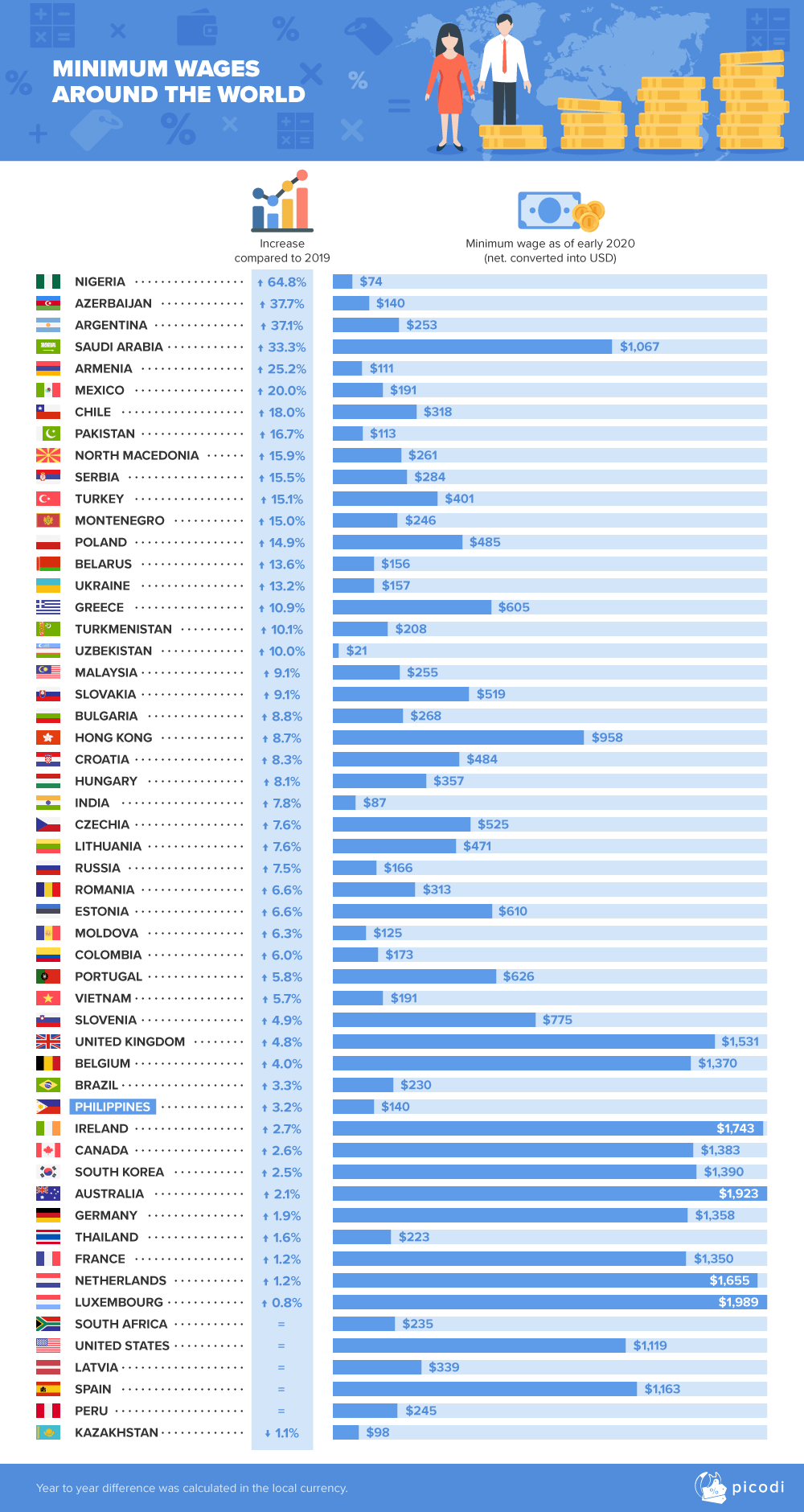 In 2020, the highest year to year increase in the minimum wage was noted in Nigeria (64.8 per cent). However, after converting into USD, this amount is still one of the lowest ($74). In some countries, like the US, Spain, South Africa or Latvia, the minimum wage remained unchanged. In Kazakhstan, the minimum wage didn’t change, but the actual amount that a worker gets into his pocket decreased, because of higher health insurance.

The Philippines ranked 39th out of 54 countries included in the report. In 2020, the monthly net pay is 3.2 per cent higher than in the previous year (₱7,139 compared to ₱6,920 for a full-time employee, based on the mean value of minimum wage rates for all regions and sectors). In comparison, the minimum wage increased by 9.1 per cent in Malaysia, 8.7 per cent in Hong Kong, and 1.6 per cent in Thailand.

The total price of basic food products amounts to ₱4,447, which is 1.76 per cent more than in the previous year. 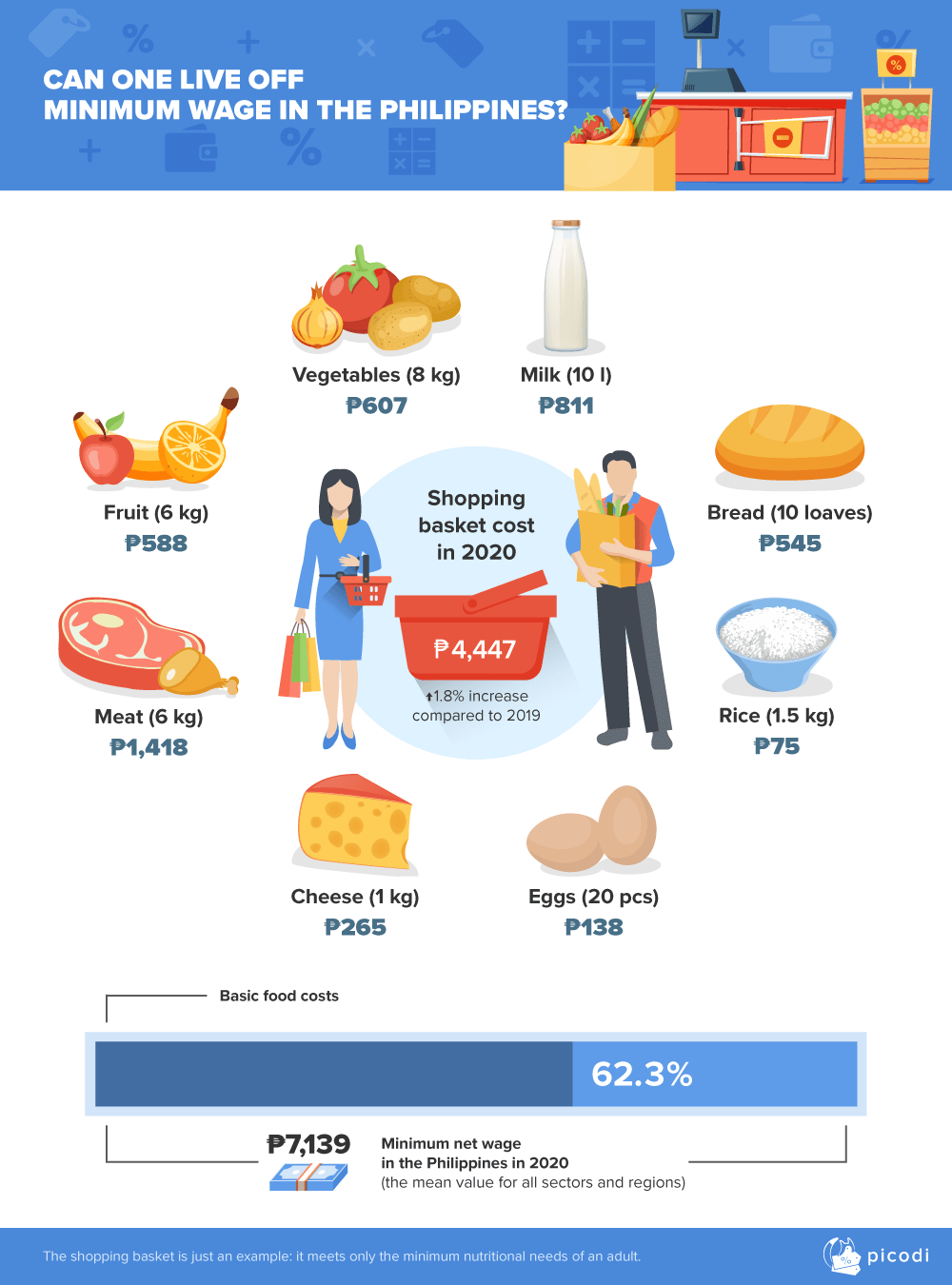 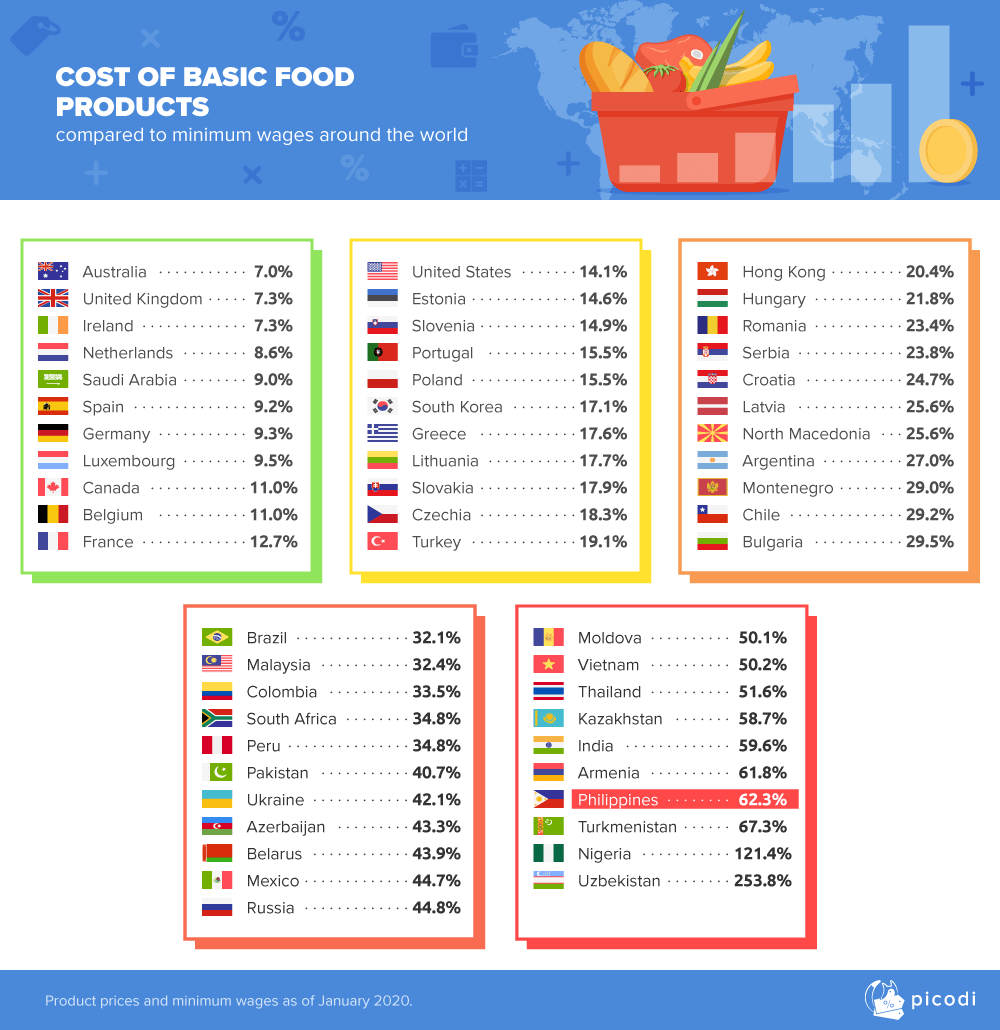 In this comparison, the Philippines placed 51st. The best ratio of food prices to the minimum wage was noted in Australia, followed by the United Kingdom and Ireland. In these countries, the basic food products are worth around 7 per cent of the minimum wage.

Popular stores and brands you can save money on with Picodi